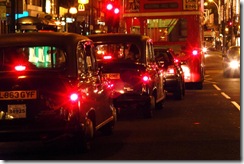 London’s taxi drivers have in the past been identified as the country’s grumpiest workers.

A survey found that traffic jams, the rising cost of petrol and drunken passengers meant that cabbies rarely managed a chortle all day.

In fact, just 0.4 per cent of taxi drivers said they laughed regularly through their working day and those individuals, of course, have had their licenses revoked.

[L]IVE IN A BIG CITY, and drive a black cab every day, you will soon see why we are morose. From grumpy fellow road users, fanciful detours, to passengers who seem to have left their brain at home that day, driving a cab through the congested heart of a major city can easily become the most irritating of occupations.

Another recent survey of cab users shows that people still judge London cabbies to be the best in the world albeit miserable, but rate Parisian chauffeurs, commonly excoriated for their rudeness, above their counterparts in Berlin, Sydney and Las Vegas. Just how bad must they be in Berlin?

While the Discovery Channel after spending eight months travelling across Britain seeking out the trickiest jobs reported a few years ago that London’s black cab drivers have the most dangerous job in Britain. How exactly you classify driving a black cab as more dangerous than risking your life every day, chained to the deck of a North Sea trawler, working on a North Sea oil rig, being a lumberjack and having trees fall on your head or demolishing an asbestos-filled building defeats me.

An Oxford University study said fishermen are 50 times more likely to die at work than any other profession. So based on these facts, how does deep sea fishing in raging seas slip into second place behind driving a comfortable vehicle while listening to Robert Elms on London Radio while saving to purchase your holiday home on Tuscany?

Well here’s my theory. The report ranked each job on the likelihood of serious injury, skill level, working hours plus mental and physical stress. For black cab drivers, these occupational hazards come from the general public whose wrath has been incurred by delays caused by roadworks, drivers giving their unsolicited opinions and Gordon Brown.

So perhaps this survey has it right. So next time you use the services of a Black London Cabbie spare a thought of our occupational risks.

4 thoughts on “Grumpy! That’s a Laugh”

A Short History of the World According to Sheep By Sally Coulthard Sally Coulthard weaves the rich and fascinating story of sheep into a vivid and colourful tapestry, thickly threaded with engaging anecdotes and remarkable ovine facts, whose multiple strands reflect the deep penetration of these woolly animals into every aspect of human society and culture.

TONY CUBA On Tony Caccavone's holiday to Cuba, he experienced a more egalitarian brand of communism and found it very appealing. So determined to educate the public, Tony decided to paint his cab with the Cuban flag, the first-ever cab with any national colours.