One of the projects that I have been most proud of is my contribution to The Spirit of London, a magnificent coffee-table book, produced by Anthony Osmond-Evans to celebrate the London Olympics and HM Queen Elizabeth’s Diamond Jubilee. The book which was presented to Her Majesty was also given to all athletes competing in the London 2012 Olympics. The book paints with a broad brush the changing seasons, personalities and cultures, which make up the colourful mosaic that is London today. In addition to my contribution [reproduced below] the Mayor of London Boris Johnson and the Lord Mayor both forewords for the book.

Any artist or photographer will tell you that professionally they observe the world around them in ways that others take for granted, and it’s this same attention to detail that’s needed when one undertakes The Knowledge, the qualification required to become a London cabbie; every street, club, bar, church, hotel and even blue plaques must be committed to memory.

In pursuit all these facets of London the student discovers that there is more to London than is apparent at first sight. Just like a photographer they stop looking at the features of London in isolation and try to put them into some context of London’s history and its people.

The Knowledge was introduced in 1851 after complaints that cabbies didn’t know where they were going by visitors to the Great Exhibition and in pursuit of obtaining the Knowledge a student discovers that some streets in the City; Milk Street, Poultry, Goldsmith Street are named after the goods once sold there, or Old Jewry was an area where Jewish money lenders lived before being expelled by King Edward I.

On the Knowledge when given London Stone to locate in Cannon Street a little research suggests that London’s prosperity was thought to depend on London Stone’s safekeeping and that the Romans could have used the limestone block as the point to measure all distances from Londinium.

While London Bridge enabled London’s cab trade in the 16thcentury to challenge the watermen’s monopoly to go south of the river ferrying wealthy City merchants to Southwark so they could enjoy the delights of the gaming houses and stews (brothels) on Bankside in an area owned by the Bishops of Winchester and known as the Liberty of the Clink – unregulated by the city authorities.

The latest place for Knowledge students to find – The Shard – London’s newest building nearing completion at London Bridge Quarter is the European Union’s tallest building and students will be expected to know its formal name – London Bridge Tower – and the entrance to the 5-star Shangri-La Hotel within its walls.

London longevity as the world’s premier city is the result of generations of resourceful, hard working individuals coming together to improve their lives and in so doing adding another strata of history, business and culture in this incredible city for future Knowledge students to go out and find.

The words of Samuel Johnson should be the mantra for any prospective Knowledge student:

“Sir, if you wish to have a just notion of the magnitude of this city, you must not be satisfied with seeing its great streets and squares, but must survey the innumerable little lanes and courts . . . that the wonderful immensity of London consists.” 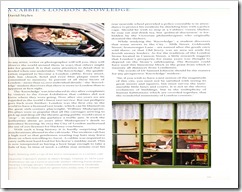