As the Green Cabmens’ Shelters charity gathered apace, better facilities were incorporated into their construction. More were erected and many, including the politicians of the day, wanted to get involved.

Green Cab Shelters have been providing shelter and sustenance to cabbies for over 140 years. Check out their history, construction, facilities and miscellaneous facts by following these links: 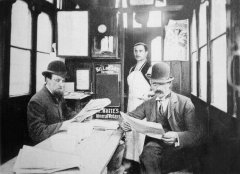 The cramped confines of a cabman’s shelter showing the lunch counter. The attendants were usually superannuated cabmen. Pictured wearing an apron is this shelter’s proprietor standing in the doorway of the tiny kitchen. From the Outing Magazine 1904.

As time went on more money was needed to build – and importantly – to maintain the facilities, particularly in the summer when they apparently ran at a loss. In this letter to the Morning Post the Hon. Secretary, John Dennistoun makes a plea for more contributions.

To the Editor of the Morning Post
Sir.—You have on several occasions noticed the efforts which have been made to improve the condition and comfort of London cabmen by providing them with shelter and refreshments while on the ranks, thus preventing them from being obliged to resort so much to public houses. May I ask you once more to assist us by giving insertion to this letter, in which I propose to show briefly what has already been accomplished on their behalf? In January last a few gentlemen made a practical beginning by appealing to the public for funds to place “shelters” on the most prominent cabstands in the metropolis. The response was ready and generous, His Royal Highness the Prince of Wales and the Duke of Westminster were amongst the first contributors. The result is we have received upwards of £1,000, and have built and supported 14 shelters, as well as encouraged others to place similar ones in the suburbs and in many provincial towns. The control of the shelters is entirely vested in the committee, and their clerk visits every shelter once a week and arranges with the attendant financial and other business. Each attendant has a salary of 17s. per week. The admission to the shelter (the same ticket being available to all) is on the following scale:–By the day, 1d.; By the week, 4d.; by the fortnight, 6d.; by the month 10d. Besides the refreshments, which are sold at the lowest possible cost, cabmen are allowed to have cooked free of charge, any food they may bring with them. Newspapers are provided, and the editors of The Graphic, Fun, and Judy have kindly promised to give copies of their publications to each shelter. It will be interesting to those of your readers, who have already subscribed to know how thoroughly the shelters have been appreciated by the men themselves. The committee are constantly receiving memorials, numerously signed, desiring fresh shelters in their districts. By notwithstanding the appreciation of the men, some find that (during the summer months, at least) the small charge for admission does not cover the salaries of the attendants. The consequence has been that we have had to meet a deficiency of from £5 to £6 per week. Our funds are almost entirely exhausted. The winter is close at hand, and the want of shelters will be more and more needed. We look to the public for fresh assistance so that we may complete and consolidate the work we have taken in hand. Annual subscriptions and donations can be paid to the credit of “The Cabmens’ Shelter Fund” at the Union Bank of London, Chancery-lane, or will be thankfully received and acknowledges by your obedient servant,

Between 1875 and 1950 forty-seven of these shelters were built at a cost of £200 each. At first the shelters had no provision for supplying meals, but by 1882 larger shelters were erected, which included a small kitchen so that hot meals and drinks could be provided by the shelter-keeper or for a charge of half-a-penny the attendant would cook any food brought in by a cabbie.

By now the watermen seem to have become the London cab stand officials who ensured that cab horses had enough water to drink. Originally, the watermen seem to have been hangers-on who fetched buckets of water from the nearest pump, or did other services for hackney coachmen and their passengers in exchange for tips. By 1850 the waterman had become a quasi-police official charged not only with supplying water, but also with keeping order on the stands and administering punishments after disturbances. Ironically, the watermen were paid by the cab drivers themselves from a compulsory fee of one penny for each time they came onto the stand, and a further half penny each time they were hired from it. By 1860, watermen had been absorbed into the police force and were not only paid a regular wage of fifteen shillings a week, but were also issued with uniforms.

The proviso laid down by the Metropolitan Police that, as these shelters were situated on the public highway, that they could be no larger than a horse and cart. This has given them their characteristic style.

Plans for a Cabmen’s Shelter. From the Building News, 1878 © Peter Jackson Collection

They are of rectangular shape with dimensions described as ‘7 bays long, by 3 bays wide’. Windows are situated on the upper part of the walls in the middle bay of the short sides, and in the second, fourth and sixth bay on the long sides, with the middle window replaced by a door at one end.

The roof was originally felt-clad, but is now more often protected from the elements by traditional slates or oak roof shingles and pitched. In the middle of each shelter was a wood burning stove with a flue leading up a the vent in the roof to carry off the smoke, this square slatted ventilation structure on the roof is not dissimilar to a dovecote. There are railings around the shelters that were intended for the tethering of the Hansom cab’s horses. Some of these can still be seen today.

The upper panels between the windows are decorated with a pattern of holes that include a monogram CSF, standing for Cabmen Shelter Fund, which most shelters have. However, some shelters have either glass or wood in the top panels instead. The whole shelter is painted the distinctive Dulux Buckingham Paradise 1 Green.

Inside, it is warm and bright but this is no Tardis, the shelters really are tiny with enough space for only 10-13 diners. Two benches run along the white walls behind two long, thin Formica tables with hinged leaves for squeezing into your place. Two people can pass with care in the central aisle, if they turn sideways. At the far end the shelter the proprietor resplendent in their apron moves between a cooker, fridge and packed shelves of sliced bread and chutney.