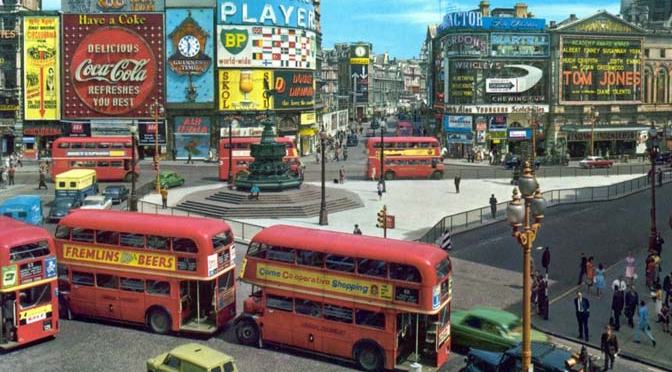 Today marks the 59th anniversary of my commencing a six-year composing apprenticeship in Clerkenwell, at the time an area populated by Italians behind delicatessen counters, greasy spoon cafes. Opposite the factory was the huge Old Holborn tobacco factory on the corner of Leather Lane market and just down the road the beautiful St. Peter’s Italian Church which was commemorating 100 years of welcoming worshippers.

This great photograph from Christopher Fowler’s excellent blog via the postcard archives of London, shows Piccadilly Circus in 1963, emerging from the austerity of the fifties, but minus the huge snowfall we endured earlier that year.

What surprises me is the vividity of the circus-like colours (forced, obviously, but still very jolly – click to enlarge). Buses each manned by a clippie, only one person sitting on the Eros steps (I’ve never seen that even at night). I rather liked the bright lime green minivan and notice the majority of adverts were for booze and fags.

The number of cars equalled cabs, you’re not likely to see that today, also the nearest cabs were ancient FX3s and note the absence of nearside doors leaving the driver open to the elements.

Last month while preparing to take a short break in Dorset, I started to feel, as my mother would say: ‘Not myself today’. Days later, after developing severe vertigo my doctor diagnosed benign paroxysmal positiinal vertigo. BPPV is fairly common with treatment necessitating having one’s head bent backwards over the edge of the examination table and then jerked to the left and right.

With more details about the health of a senior citizen than is probably judicious, we come to the kernel of this post.

When I started out CabbieBlog I had envisaged putting opinions and knowledge (yes, it’s that word again) over to anyone who felt it necessary to imagine themselves sitting in the back of a cab.

Now nearly one-and-a-half decades later, and finding myself with time on my hands due to my enforced rest, the result of the aforementioned medical condition, it’s given me the opportunity to formulate the direction, or life, of the blog in the New Year.

In the past, I’ve rejected the idea of daily postings as this cuts into life in the ‘real world’, the same reason I steer clear of interaction on social media.

Since its inception, CabbieBlog has been careful to avoid religion and politics – with the exception taken of today’s London Mayor – as this tends to bring out the trolls from inside their cubby holes. However, any genuinely insightful comments are always given the courtesy of a reply.

Looking over the bric-a-brac of writings I’m surprised at its range, although it’s mostly London history and nothing about sport. I’ve always been annoyed by people assuming I know about football.

Me: (tetchy, after a bad day) I don’t know, or care, but who do you think is going to win Portrait Artist of the Year on Sky Arts?

However, blogging has taught me a lot.

First, never assume. Readership is diverse and surprising. The median age is almost certainly older for the blog than among my Twitter readers (hence me not interacting with my followers), but is more far-reaching. It has been a brilliant sounding board for ideas, but I feel I’ve run a rather shambolic but democratic exchange of ideas about London and its environs.

Second, answer with thought. Readers have every right to ask difficult questions and deserve respectful and considered answers.

Third, listen to the young, assuming anyone under 40 reads my missives.

And fourth, above all, keep learning. There’s rarely a day when a reader doesn’t teach me something. We cabbies might be, as I’ve described on @johnsonslondon: An accumulation of local information which doth give one granted the illusion of superior powers and wisdom.

But we can still accumulate more knowledge.

Having BPPV left me feeling inebriated, and as everyone knows when they’re pi**ed they think of the best ideas. So after much thought, from the new year, CabbieBlog will get two extra postings a week, making content uploaded 7 days a week.

Well, like much dreamt up while less than compos mentis, the ‘new’ two posts are, in fact, hardly unique to CabbieBlog. Thursday will see the return of Whinge of the Week, but rest assured it won’t be an old man repeating his grumbles.

While on Saturday an item brilliantly titled Previously Posted will be available. It’s not new content but I guess that most of my regular visitors haven’t read, or maybe they were just not interested in reading work composed over 10 years ago.

Only time will tell, insightful comments to the usual address. 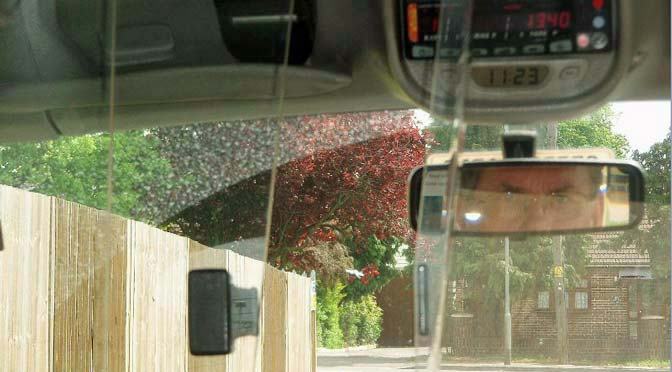 Contrary to the popular perception that all cabbies like to chat, punters are also guilty of asking, well, some pretty banal questions.

The problem for the driver here is two-fold: if he answers in the affirmative the punter might be weighing up the opportunity of mugging him; conversely, if he says it’s quiet the passenger queries the reason why it took so long to catch a cab or thinks the cabbie just wants to moan and soon the conversation will turn to the shortcomings of the current Government/England manager/or London’s Mayor.

“What do you do for a living?”

Passengers sometimes enquire politely about what we do for a living. This is not, as you might expect, a unique occurrence on long, late-night journeys, and sometimes asked more than once by the same passenger.

Many cabbies work the more lucrative evening shift, so the punter probably feels a degree of sympathy as he clocked off work at five. The supplementary inquiry “Can you pick me up?” at a time and place to get me home like we are going to drive halfway across London helping you get the last train home.

Why on earth should that be a topic of conversation with a stranger unless, of course, you want a lift home – see the previous inquiry.

“What chance is there of me getting a cab?”

In Ireland one private hire driver, after being repeatedly asked these futile questions has stuck onto the vehicle’s partition screen a notice reading:

Please Don’t ask futile personal quizzes. I am from Ghana, now an Irish citizen. Yes I like it here. I have a Master’s Degree (MBA) UK. Please show due esteem.

The message went viral on Twitter, at the time of writing had received over 166,000 likes and had been shared more than 12,500 times. 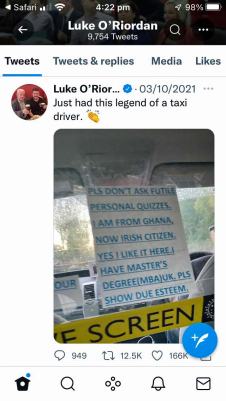 However with over 1,000 replies, inevitably some thought the message was a ‘bit rude’. One comment read:

It’s a bit rude, to be honest. What’s wrong with asking him where he is from originally (presuming he doesn’t have an Irish accent) and whether he likes it here. Having a bit of futile chat is part of what we are.

Another response from Eion Dunning read:

Man in customer service hates customers. Best of luck to him.

As an Irishman living in England for thirty years, I often get asked where I’m from . . . hell, even Irish people ask me where I’m from, they also often ask me if I like England. It’s called fu#king small talk.

Getting straight to the point is a highly underrated attribute these days.

Others joked that the driver needs a second sign displaying whether he has been busy and what time he finishes.

I know those questions well. 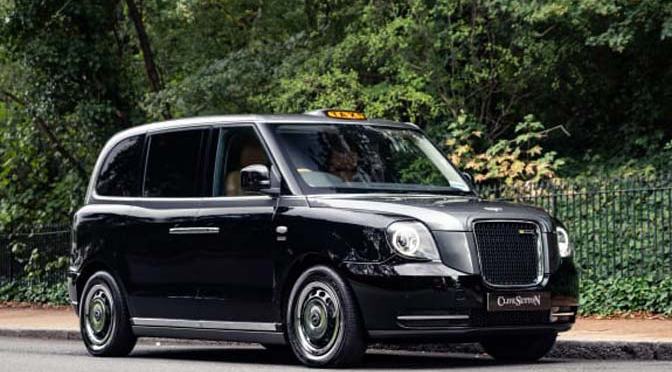 Occasionally here at CabbieBlog, we bring interesting cab conversations. Situated on St. John’s Wood roundabout, and passed by thousands of cabbies every day, Clive Sutton has produced the ultimate cab. Dubbed the world’s most luxurious black cab, the Sutton VIP LEVC Taxi starts at £104,680, with the fully-loaded vehicle costing £121,480.

In 1891 Wilhelm Bruhn invented the taximeter, this at a stroke gave the vehicle its now common appellation, and made travelling by taxi, whether as a passenger or driver, a lot less stressful.

Anyone who has taken a taxi without a meter knows the scenario, either you negotiate the fare before starting the journey or argue the cost when arriving at the destination.

I’ve experienced the agreed fare doubling during a journey in Egypt, or whilst in Capri, the meter adorning the dashboard without being activated.
Seventy years before Herr Bruhn brought his clever device to London’s streets Mr Quaife solved the problem by producing a list of fares in a handy book.

According to Sean Farrell in his extensive cabbie history: Abstracts of Black Cab Lore

By 1828 there were reported to be six men and one woman, all having the name Quaife, working at the Hackney Coach Office…at least James [Quaife] was industrious. In 1821 he published, under the authority of the Hackney Coach Commissioners, The Hackney Coach Directory, which he claimed had 18,000 distinct fares.

The book’s compilation was made easier than it would be today, as cabs could only pick up at the 84 designated ranks, so all calculations start from these places. 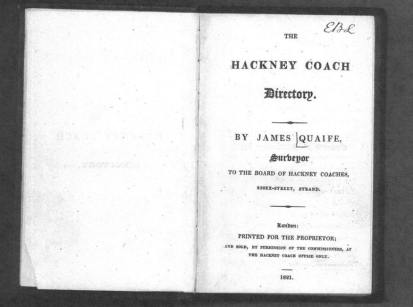 Later the 1853 Hackney Carriages Act stipulated that every driver was to carry a book of fares which had to be produced when asked for by the passenger.

So how do the Georgian prices stand up to today’s metered fares?

Obviously, I haven’t driven these distances with the meter running and with the cab devoid of passengers. Instead, I’ve lazily used the taxi-calculator.com website and based it on tariff 1 (daytime) rates. 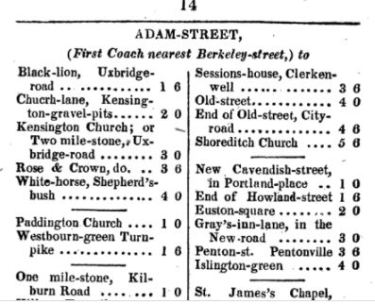 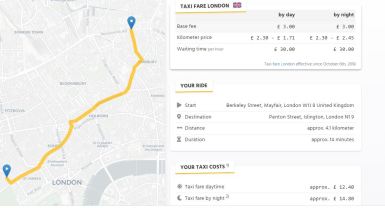 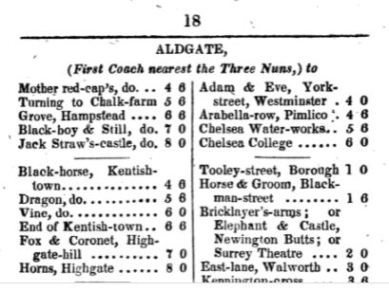 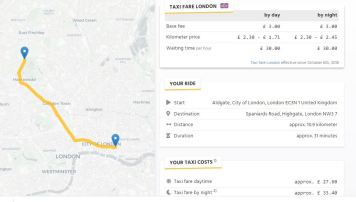 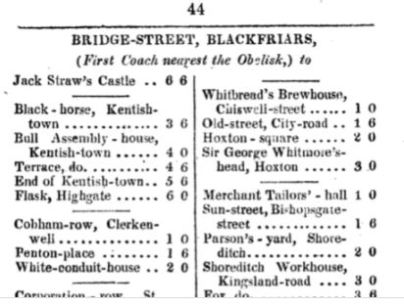 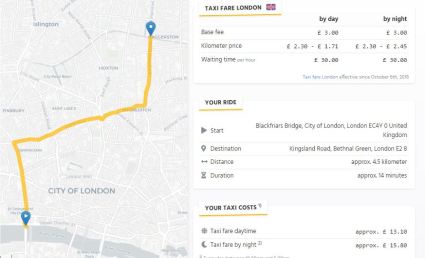 So there you have it, today’s fares are not much different than 200 years ago. 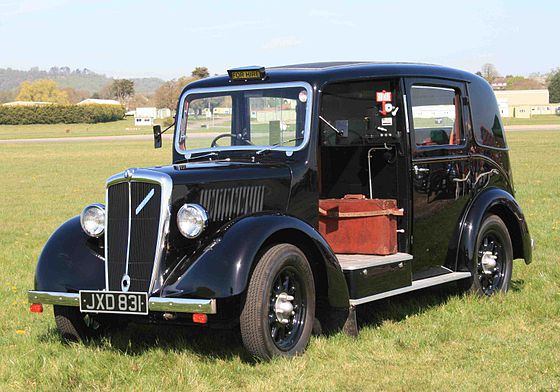