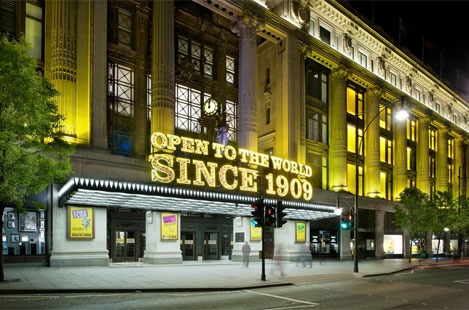 Recently on a cold, overcast March morning I was to be found standing by a rather unprepossessing grave situated under a Holm oak by a small parish church in Dorset.

It was the culmination of a book that I had been reading whilst holidaying in that charming part of England.

Lay’d beneath a modest headstone is the greatest retailer London has ever seen and the subject of a fascinating biography.

[D]ubbed ’Mile-a-minute Harry’ this man changed the way we shop while at the same time as gambling away his fortune. Considerably older, and it has to be said, less handsome than Jeremy Piven who plays Harry in the TV serialisation of the book, Harry Selfridge perhaps did more to change the perception of the department store than anyone else.

He made heavy use of advertising and gimmicks to draw in customers and also permitted browsing, let customers handle merchandise, and paid his employees a high enough wage that permitted them to live away from the business instead of over it.

Harry also coined the phrase “the customer is always right”. Harry Gordon Selfridge focused much of his attention on women from all social classes. His store was the first to have women’s toilets, permitting them to stay all day instead of having to go home. He even championed women’s suffrage at a time when suffragettes bombed public buildings to bring attention to their cause. He flew their flag above the shop, published ads in their newspapers, and carried items in their colours.

His very utilitarian grave is flanked by his mother’s tomb and his wife Rose’s ornate grave with its angel. Following her death, Harry Selfridge became something of an elder socialite and his gambling habit increased. He entered into a relationship with Jenny Dolly whose gambling habit was shared and encouraged by Selfridge, who would often charge his and her gambling debts to the store.

Eventually, he was forced out over this poor financial management. In later years, he would regularly travel to the store in shabby clothes, and once was even arrested for vagrancy.