Continuing from last week’s post here is proof of the shrinking high street.

A tradition for many of us ‘baby boomers’ at this time of the year was the annual pilgrimage to one or more of London’s department stores. Curiously many had originated with two owners: Bourne & Hollingsworth; Dickins & Jones; Marshall & Snelgrove; Swan & Edgar; Derry & Toms; Arding & Hobbs; or Swan & Edgar. Many now do not exist as stand-alone department stores, just not able to move with post-war shopping trends.

Gordon Selfridge London’s greatest department store proprietor saw how trends were changing as early as 1909 when he opened the largest of all stores at that time and allowed customers to see the merchandise on offer, and not as his competitors, offering to show prospective buyers a selection chosen by the shop assistant.

To get some idea of pre-war shopping customs watch any episode of Are You Being Served?

War years had protected most stores from the new style, but by the 1970s most had suffered from the birth of style-shopping and both management and staffs were unable to update fast enough to attract the newly-moneyed.

Politeness, knowledge of stock and free advice gave way to self-service racks stocking the latest fashions which would change by the season.

The specialist stores: Lilywhites for sporting wear; Fenwicks aimed at country ladies of a certain age; and Libertys for fabrics have clung on, but most have succumbed to the supermarkets of TK Maxx, H&M or the nightmarish souk – Primark.

Should you be in any doubt about the changing face of the high streets consider this list of closed department stores compiled by Diamond Geezer:

About 16 shops are closing every day as retailers restructure their businesses and more shopping moves online. A net 1,234 stores shut on Britain’s top 500 high streets in the first half of the year, according to research by PwC.

The demise of Tobacco Dock

Peter Watts writes on his Great Wen site of the demise of Tobacco Dock. Opening in 1989 the dock conversion featured two arcades of shops on two floors inside a skillfully modernised structure that retained its Victorian industrial integrity. It now lies there completely empty.

Once London had a number of prestigious stores many owned in a partnership of two men. Unlike the generically named Next or Top Shop their premises reflected the owners’ personal taste and retain acumen. As our shopping habits change the great days of the department store are probably over. There are some survivors left in London, but many of the great privately owned retail partnerships have gone. Old fashioned concepts like knowledgeable staff, politeness and service are now less important in a digital retail age. 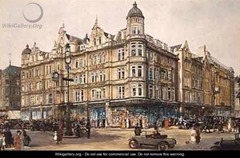 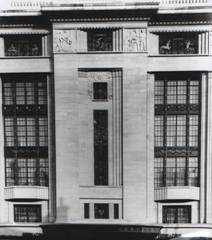 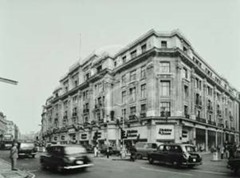 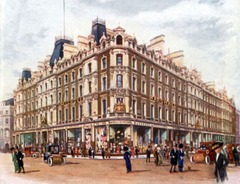 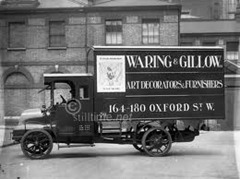 This must be the strangest ‘points’ on The Knowledge, a hardware shop located in one of North London’s busiest streets. Crucially it stands at the junction of Englefield Road, a major cut through for travelling west, hence Knowledge examiners expect you to know the exact location of this very eccentric shop.

Owner, Tony O’Kane has constructed some ingenious wooden designs and displayed them on the fascia above his window displays.

[M]ORE REMARKABLY is the three-sided clock above the door, its numbers on the dial replaced by representations of building materials designed by Tony.

No corporate colours of Homebase or B&Q, this is very much a family business, in fact, contrary to the popular belief that ‘KTS’ refers to Kingsland something, its name is derived from the initials of Tony’s three children: Katie, Toni, and Sean.

The shop is a veritable Aladdin’s Cave for the DIY enthusiast, with Tony on hand to offer advice, from the knowledge obtained as a qualified carpenter.

When the distinctive signs were removed for maintenance, there was an outcry with locals demanding they be reinstated, a story which even made the national press.

Many hardware shops have closed in recent years, victims of the Internet and the public too lazy to engage in a spot of DIY, hopefully, this little treasure will continue to be a ‘Point of Interest’ on The Knowledge for years to come.

Featured image: Hardware department counter in 1913-replica of the Co-operative Society Store at Beamish Museum which was moved from Annfield Plain in County Durham by Andrew Curtis (CC BY-SA

Standing here today, watching the 18-hour traffic jam that is now Aldgate, it’s hard to understand why this area is called Gardiner’s Corner, the spot that stopped anti-Semitism in its tracks.

Looking towards a dull modern office block it is difficult to visualise a proud store dubbed ‘The Harrods of the East’, that stood opposite Aldgate East tube station, and the scene of one of London’s biggest demonstrations.

[T]HIS WAS THE SITE of Gardiner’s department store until it was gutted by one of London’s largest post-war conflagrations.The Scottish clothing store, which stood at the junction of Whitechapel High Street and Commercial Road (now slightly shifted from its original position), would, in 1972 be lost. Its demise is vividly recounted in Mick’s Muses: Death of a Landmark.

Gardiner’s was also the scene of the famous Battle of Cable Street.

On Sunday, 4th October 1936, the British Union of Fascists, led by Sir Oswald Mosley marched through the East End, the location was deliberately chosen as it then was the heartland of London’s Jewish community.

Protests to the authorities had proved fruitless forcing many to turn up determined to stop Mosley’s 3,000 black shirts marching through this Jewish quarter.

Estimates vary wildly, from 100,000 people up to as many as 250,000, whatever the total, the crowd was huge and vastly outnumbered the Blackshirts and the Metropolitan Police officers, who perversely had been sent to prevent the march from being disrupted.

More than 100 were injured in the violence that followed and some 150 of the demonstrators were arrested. Most of the charges were of a minor nature but some of the ringleaders were given up to three-year terms of imprisonment, quite how the authorities managed to justify this when less than three years later we declared war against those who sought to impose anti-Semitism upon Europe.

Every month CabbieBlog hopes to show you a little gem of a building that you might have passed without noticing, in the past, they have ranged from a modernist car park; a penguin pool; to a Hanoverian gatehouse.

This regular post attempts to discover those little architectural delights often overlooked, and for the Apple store, you can only describe it as hidden in plain sight.

[I] DOUBT if anyone entering Apple’s flagship store realises the beautiful mosaics above their heads as they head towards the latest in technical wizardry.

Much of John Nash’s original Regent Street has been lost as the leaseholders of the world’s first purpose-built shopping thoroughfare put their corporate stamp on their shops’ façades.

One of those leaseholders was glassmaking and mosaic company Salviati, founded by Antonio Salviati in Venice in 1859.

Arriving from the island of Murano just off Venice’s coast in 1898, the company adorned the outside of its newly built Regent Street premises with spandrel mosaics to advertise their London premises.

Overall, four coats-of-arms and two lions are represented [below].

Above them are some of the cities where Salviati’s wares could be found: Paris, New York, St. Petersburg and Berlin.

On the left is the heraldry for the cities of London and Westminster (that’s if they have heraldic symbols), along with the British Royal Lion.

On the right, the islands of Murano and Burano are represented, along with the Venetian winged lion of St. Mark.

Suggs and the City: Journeys through Disappearing London by Suggs Drawing on three series of Suggs's ITV programme of the same name, on the Suggs in the City chatshow, and on Suggs's personal experience of loving London, this is the enlightening and highly entertaining story of a living, breathing town and its ability to absorb and adapt over the centuries, seen through the eyes of one of its favourite sons.