London’s oldest flyover is not some ugly crumbling concrete edifice, but a much more elegant structure built well before Britain’s first petrol driven motor car was launched onto the streets of Walthamstow in 1894.

There is an apocryphal story which every generation of Knowledge students hears. It relates to an Appearance [oral test] when a Knowledge boy tells the examiner that you could turn right into Farringdon Street from Holborn Viaduct. The salutary lesson to be learned is that if he had just gone to that location he would have discovered there was a 60ft drop onto the road below. The hapless Knowledge boy had relied on his A-Z map and had learned the hard way that maps should not be slavishly followed.

Spanning the Fleet River valley (the river now covered by Farringdon Street), Holborn Viaduct was built between 1863 and 1869 and links Holborn with Newgate Street.

The flyover was designed by City of London surveyor William Heywood. Four bronze statues featuring agriculture and commerce feature on the south side, and depictions of fine arts and science on the north side. There are statues of winged lions, dragons, globe lamps and the City of London’s coat-of-arms.

Several old buildings and indeed some entire streets had to be demolished before construction could begin and thousands of bodies buried in St Andrew Holborn’s northern churchyard were relocated.

Made of cast iron, the flyover is 1,400 feet long and 80 feet wide and features three spans – the largest in the middle – supported on granite pillars.
Pavilions containing stairs allowing pedestrians to move between levels were built at either end on both sides of the roadway (the two northern buildings are both replacements, as are the globe lamps – the previous versions were demolished after being damaged during the Blitz.

The viaduct was opened by Queen Victoria on 6th November 1869. It was listed as Grade II in 1972. 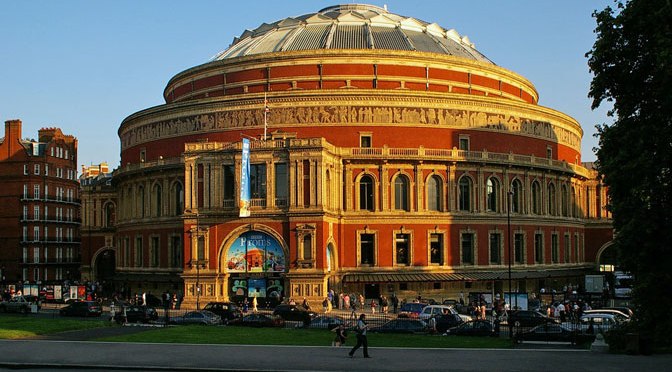 This Monday, the 29th March, marks the Royal Albert Hall’s 150th anniversary when Queen Victoria inaugurated the hall and fulfilled Albert’s dream of being the country’s premier concert hall.

Here are some fascinating facts about this much-loved venue which, has hosted the BBC Proms since 1942 after the Queen’s Hall in Langham Place was destroyed when a bomb hit the roof, causing a fire.

The foundation stone having been laid by Queen Victoria, and still in mourning for her beloved husband, the Queen renamed the prosaically titled ‘The Central Hall of Arts and Sciences’ to The Royal Albert Hall in honour of her late husband, turning a tribute to a prince into a cultural icon.

Albert, the Prince Consort to Queen Victoria was a great lover of the arts, he wanted to establish more permanent venues for the public to engage in the arts and sciences after the success of the Great Exhibition. Work was still being done on this scheme when Albert died in 1861.

Costing £8,000, the Organ, built in 14 months, the largest in England with 9,999 pipes, was once powered by 2 steam engines, if laid end-to-end the pipes would stretch almost 9 miles. The largest measures 2ft 6in diameter, 42ft high and weighs almost 1 tonne – the smallest as wide as a drinking straw.

Before the dome was placed on top of the hall, it was completely assembled in Manchester to be sure it fit together properly before being dismantled and taken to London. It then was re-assembled, when the props were knocked away it fell 0.08mm precariously dropping into its current position.

The glazed-iron roof of Royal Albert Hall measures 20,000 sq .ft. and was at the time of building the largest unsupported dome in the world. The Royal Albert Hall can currently seat 5,400 people, but when it was first built, it could seat 8,000.

The Royal Albert Hall’s distinct shape may also have spared it from the bombing, as the Luftwaffe reportedly used it as a landmark, although most of the glass panes were bomb-damaged. During the First and Second World Wars, the Hall’s roof was used as a navigation point by pilots on the London skyline.

The design of the hall was based on the Coliseum in Rome, the acoustics inside weren’t perfected until 1969 when 135 fibreglass acoustic damping discs were suspended from the ceiling, they have been redesigned and 50 diffusers were removed, the remaining 85 were reconfigured.

A woman’s mosaic class designed the frieze on the top of the building. The first Sumo wrestling tournament in the sport’s 1,500-year history was held in the Royal Albert Hall in 1991. It has a Grade I listed chimney (called ‘The Chimney’), still in use today sitting above the steam boilers which heat the Hall.

In 1872, the year after the Royal Albert Hall was completed, plans were developed to build a pneumatic railway that would carry visitors from the South Kensington Tube to the Royal Albert Hall by way of The Victoria and Albert Museum. However, the plans went nowhere and the railway was never built.

Sykes & Son Limited based on Essex Street, just off Strand since 1759 Is moving. As London’s oldest builder Sykes & Son was formed by John Willis in 1759 and its earliest records show that it worked at St Clement Dane’s Church in 1759 – where it worked again some 250 years later. Other clients include the Tower of London, Victoria & Albert Museum, the Royal Albert Hall and English Heritage.

They have worked on Royal palaces, world-renowned museums, galleries and universities but a new possible client for the company has been uncovered, ironically at the same time, Sykes moved to Bloomsbury.

At 54A High Street, High Barnet a crown post timber roof was found intact dating to 1397, or perhaps earlier, which would make it the oldest known surviving timber structure in London. To put it into perspective Westminster Hall with its huge hammer-beam roof, commissioned by Richard II was completed in 1401.

This shop was being converted from a hairdresser to a florist when the discovery was made. Built-in the days when High Barnet was on the route of animal drovers who stopped the night at taverns or perhaps sold animals at a fair. Barnet fare is one of the most well known and oldest in the country.

At some point, it is thought the building was amalgamated into a group of taverns that became the Mitre, which was established in 1633 and is Barnet’s oldest former coaching inn.

Analysis by Historic England has shown that the oldest timbers were from trees felled between 1330 and 1362, those mature trees would have been saplings at the time of the Norman Conquest.

J. Evans Dairy a Grade II listed building on the corner of Warren Street and Conway Street.
Built 1793 and tiles circ. 1916 a rare surviving example of a Welsh dairy.

[I]T IS A CUT THROUGH we cabbies once used when wishing to turn into Euston Road from Tottenham Court Road, by turning down Warren Street we once missed the traffic and join the bus lane at Great Portland Street which also had the added advantage if you timed it correctly of enabling you to collect your evening newspaper without the inconvenience of having to stop as the friendly vendor standing on the corner presses the paper into your hand. I have used this cut through numerous times and have always admired this little corner shop with its blue tiles hardly realising how important the shop was once. Unfortunately Camden council had now put pay to this useful detour. 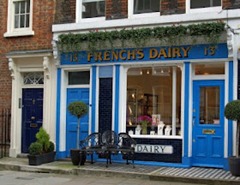 Before we had supermarkets which now supply all our provisions, we were served quite adequately by door deliveries and one of the last to survive is the milkman.

From about 1860 onward, as a result of hard times in Wales, many Welshmen, especially from Cardiganshire set up dairy businesses in London.

Cows in the back of the shop

Keeping cows on the premises in the middle of London, many if these dairies were set up in close proximity to the Marylebone/Euston Road which leads directly from Paddington Station, the mainline terminus of the Great Western which serves South Wales (in fact until very recently all early morning trains were still called ‘milk trains’).

In King’s Cross Road there is a faded sign of a company that supplied all the paraphernalia needed to produce milk products.

London is home to the oldest and largest Welsh community outside Wales. The middle of the 19th century saw an exodus of Welsh dairymen to London with many setting themselves up as dairies. By 1900 it is estimated half of all dairies in the capital were Welsh.

Even by 1950 there were still over 700 Welsh dairies in the City. The last survivor in Clerkenwell is believed to have closed as recently as 2001. 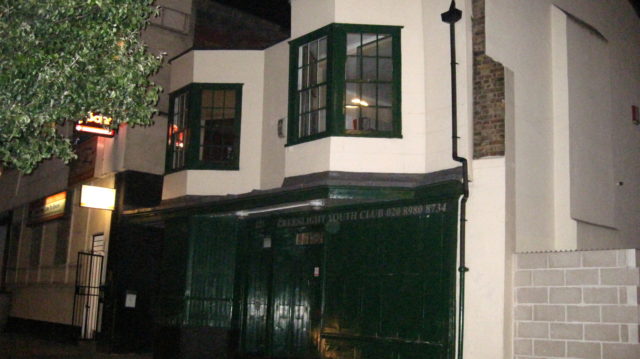 Every month CabbieBlog hopes to show you a little gem of a building which you might have passed without noticing, and this at the side of the main road one took quite a time to find.

[T]he building this month is passed unnoticed by thousands every day standing as it does incongruously next to a drive-in McDonald’s close to the Bow flyover, so anonymous are its outward features they belie the building’s importance.

The origin of Bow

There is a story that the name Bow was derived from the shape of the arch of the 12th-century bridge which spanned the river Lea where Bow flyover now stands. This bridge is thought to have been the first stone-arched Bridge in Britain and this was 60 years before the first such bridge was built across the Thames in London.

There is a story that this bridge was commissioned to be built by Queen Matilda after she ‘had been well washed in the waters’ when trying to cross by the ford when on her way to Barking. During the 14th century, there was a chapel on the bridge dedicated to St Katherine and in this, there lived a hermit. Chaucer referred to Bow in his Canterbury Tales which takes the name back at least to the 14th century.

No. 223 Bow Road seems to sit rather shyly near to the brash new MacDonald’s nearby. The building dates back to the 17th century and so it is possible that Will Kempe, a leading Shakespearean actor, who crossed the river Lea at Bow in 1600 on his 9-day Morris Dance from Stepney to Norwich, might have known this little house with its two quaint bay windows on the first floor.

Its rounded bays on the ground floor were added later in the early 19th century to make a shop front in the rural village of Bow. The oldest photograph of this building is of M. Howes was an old established corn and flour dealer selling animal feed, horse mixture, straw, and hay from this double-bay 17th-century house. Grade II listed it is one of the oldest properties in East London.
A version of this post was published by CabbieBlog on 3rd September 2013