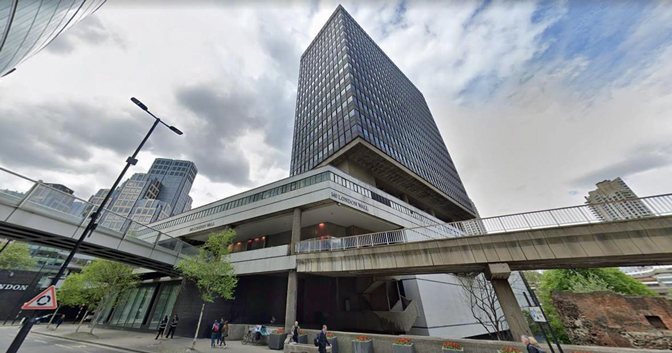 Bastion House, looking like a backdrop to a dystopian television drama, was built between 1972-77 as part of the Barbican development. Supported on stilts over the current Museum of London, it appears as if it will come crashing down on the beleaguered citizens of the evil regime.

The Londonist described this out-of-date office block as the world’s biggest broken flight departures board. It now faces the wrath of the wrecking ball, with plans to replace the offices with a, er, ‘office-led development’, which sounds itself as out-of-date with many working from home.

The Barbican’s Tenants Association conducted a tenants’ online poll with 88 per cent of respondents saying they’d rather see Bastion House, and the Museum of London, repurposed, rather than snuffed out altogether.

Face-to-face residents’ meetings, discussing the fate of this Powell and Moya-designed office block rallied for its salvation. “It may be too late,” says the Barbican Association “but we should question the desirability of demolishing Bastion House and the Museum of London and replacing them…”. 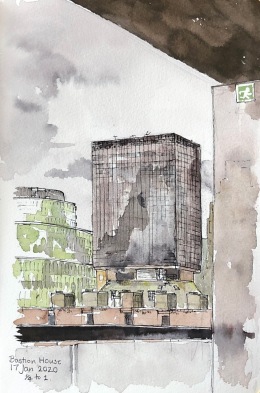 One person’s idea of beauty isn’t necessarily how others would view this Brutalist seventeen-storey slab, but it is the only survivor of five skyscrapers that were built along London Wall’s stretch of road as part of the South Barbican plan.

Bastion House might not be everyone’s choice to save from demolition, but Bracken House at the junction of Friday Street and Queen Victoria Street, built about the same time, has been given Grade II* status with the Financial Times returning to make it their headquarters (after previously vacating it for another building). If the FT can repurpose an old structure, surely they could find a use for Bastion House and the old Museum of London.

Watercolour image of Bastion House by Jane Northcote. The line of red brick, and what looks like chimneys, in the foreground are the rooftops of a part of the Barbican, ‘The Postern’. Behind them is the Barber-Surgeons’ Hall on Monkwell Square. The curved green building on the left is on the other side of London Wall. It is ‘One London Wall’ near the Museum of London Rotunda: multi-use office space. Copyright Jane Northcote, her paintings of London can be found at JaneSketching.com, @janenorthcote on Instagram.