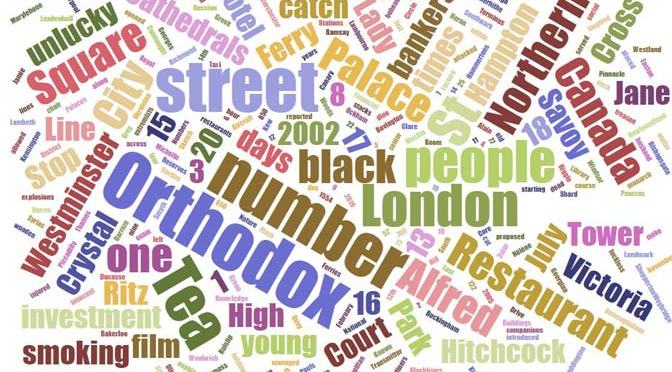 Core by Clare Smyth, Hélène Darroze at the Connaught, The Lecture Room and Library at Sketch, Restaurant Gordon Ramsay, Alain Ducasse at the Dorchester

6Ferries across the Thames

Known as 7/7, four Muslim extremists attacked London on this day starting at 8.50, within an hour the explosions had left 52 innocent people dead and over 700 injured

9The number of days Lady Jane Grey was Queen

The luckless monarch managed just nine days before she was charged with high treason, on 12th February 1554, Lady Jane was beheaded, along with her husband, at Tower Green. She was 16 years old

3The number of people NOT allowed to dine at the Savoy

Superstition at The Savoy Hotel has it that 13 diners are unlucky. If your companions make up that unlucky number a 1920s three-foot-high black wooden cat is introduced to a 14th chair, a napkin is placed around his neck and he is served with each course by a diligent waiter

Fifteen Restaurant in Westland Place opened in November 2002, inspired by Jamie Oliver, a social enterprise providing young people with the opportunity to have a career in catering. It closed in May 2019 after training 15 young people a year at £40,000 each

Installed to commemorate the centenary of Alfred Hitchcock’s birth, the designs capture the star or the feel of the film, from Psycho to Catch a Thief. In a strange coincidence, one of them is for an Alfred Hitchcock film titled Number 17

8Blends of tea at the Ritz

The Ritz is the only hotel in the UK to have a certified Tea Sommelier, Giandomenico Scanu, who travels around the world to various tea plantations to source the 18 different types of loose-leaf tea to choose from at their famous Afternoon Tea in the Palm Court

Stop K on Hounslow High Street, go there and try catching every bus in order, then return home and think about what you’re achieving with your life

0Minutes equivalent on the Northern Line to smoking a cigarette

According to a 2002 study air quality on the Underground was 73 times worse than at street level, with 20 minutes on the Northern Line having the same effect as smoking a cigarette

3 thoughts on “London by numbers”