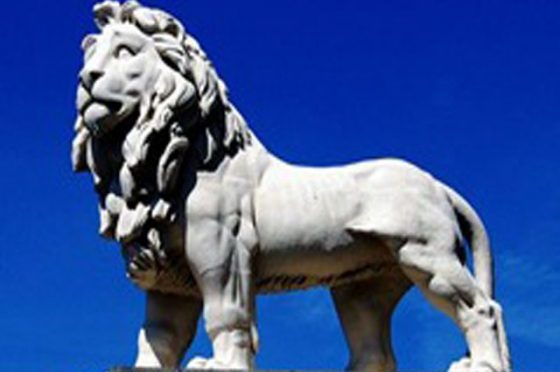 Standing on Westminster Bridge guarding the gateway to south London stands the 13-ton South Bank Lion, made from London’s famous artificial stone, said to be the most durable and weatherproof of any such material so far invented. Patented by Richard Holt and manufactured in his Lambeth yard from 1720, this stone was successfully modified in 1769 by ‘Mrs’ Coade by the addition of finely ground glass and prefired clay.

[O]VER THE NEXT 70 years Coade Artificial Manufactory as it became known, produced a range of garden nymphs, sphinxes, statues, busts and other ornamental features for buildings, Coade stone can be found at Buckingham Palace, Windsor Castle, the Tower of London and on the tomb of Captain Bligh in the churchyard of St. Mary-at-Lambeth.

As it says on one of its paws the South Bank Lion was completed in May 1837 just three years before the factory closed with a loss of the stone’s precise composition formula.

Our Lion first graced the Lion brewery on the south bank of the Thames near where Hungerford Bridge now stands. Painted red and standing high over the entrance archway he even survived the Blitz. The brewery was demolished in 1949 and our Lion disappeared to emerge to grace the Festival of Britain in 1952. Two years later at the King’s suggestion, the Lion was placed at the entrance to Waterloo Station.

He has only stood in his current position since 1966. When it was moved several items of interest were found in a recess in the lion’s back, they included two coins from the time of William IV and a trade card of the Coade family, so when the Lion was moved to its present site a 1966 coin and a copy of The Times for 17th March 1966 were added to the original items.

The lab boys have rather broken the myth of a lost formula for Coade Stone having recreated it perfectly in a laboratory in the British Museum.

If you want to have a go this is how you go about it:

Its manufacture requires special skills: extremely careful control and skill in kiln firing, over a period of days. This skill is even more remarkable when the potential variability of kiln temperatures at that time is considered. Mrs. Coade’s factory was the only really successful manufacturer.

The ‘grog’ was made up of finely crushed fired items, such as pitchers (ware that has been fired but rejected due to the presence of faults). This was also referred to as “fortified clay” which was then inserted (after kneading) into a kiln which would fire the material at a temperature of 1,100 degrees Celsius for over four days.

As a further blow to his mythical status, our Lion’s manhood was reworked after being considered too large once he came down from his high archway over the brewery gate.