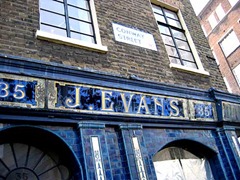 J. Evans Dairy a Grade II listed building on the corner of Warren Street and Conway Street. Built 1793 and tiles circ. 1916 a rare surviving example of a Welsh dairy.

It is a cut through we cabbies use when wishing to turn into Euston Road from Tottenham Court Road, by turning down Warren Street we miss the traffic and join the bus lane at Great Portland Street which also has the added advantage if you time it correctly of enabling you to collect your evening newspaper without the inconvenience of having to stop as the friendly vendor standing on the corner presses the paper into your hand. I have used this cut through numerous times and have always admired this little corner shop with its blue tiles hardly realising how important the shop was.

[B]efore we had supermarkets which now supply all our provisions, we were served quite adequately by door deliveries and one of the last to survive is the milkman.

From about 1860 onward, as a result of hard times in Wales, many Welshmen, especially from Cardiganshire set up dairy businesses in London.

Keeping cows on the premises in the middle of London, many if these dairies were set up in close proximity to the Marylebone/Euston Road which leads directly from Paddington Station, the mainline terminus of the Great Western which serves South Wales (in fact until very recently all early morning trains were still called ‘milk trains’).

In King’s Cross Road there is a faded sign of a company that supplied all the paraphernalia needed to produce milk products.

London is home to the oldest and largest Welsh community outside Wales. The middle of the 19th century saw an exodus of Welsh dairymen to London with many setting themselves up as dairies. By 1900 it is estimated half of all dairies in the capital were Welsh.

Even by 1950 there were still over 700 Welsh dairies in the City. The last survivor in Clerkenwell is believed to have closed as recently as 2001.

The London Cabbie's Quiz Book: Pit your wits against the world's smartest taxi drivers By Ian Beetlestone Licensed London taxi driver, Guardian contributor, writer of the Words on the Street blog, and lead singer, pianist and songwriter with London-based band the Drowning Rats, gives us hundreds of obscure questions about London, some of which even I didn't know.