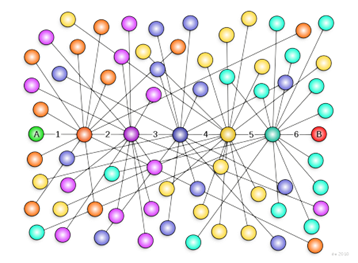 I would say in my youth that shaking hands with me made you just three steps from any world leader, for my father would, during his working day, come into contact with members of the Royal Family.

I did not realise it at the time but a social psychologist – Stanley Milgram – had researched what he termed “social capital” which he sent several packages to 160 random people living in Omaha, Nebraska, asking them to forward the package to a friend or acquaintance who they thought would bring the package closer to a set final individual, a stockbroker from Boston, Massachusetts. He found that the very first folder reached the target in just four days and took only two intermediate acquaintances. Overall, Milgram reported that chains varied in length from two to ten intermediate acquaintances, with a median of five intermediate acquaintances between the original sender and the destination recipient. It was enough for him to conclude that with our extended networks it really was a small world.

[H]e discovered that typically there average 5.2 people separating you from anyone in the world. This would later be called “Six Degrees of Separation” taken from the title of a 1993 film based on tangential relationships starring Will Smith.

The definition of this are the “hops” which are the number of jumps from person-to-person needed to reach your target friend and “degrees” record the number of people separating the two parties. Translated this would mean that six degrees of separation would actually be seven hops.

This term has led to a trivia game entitled “Six Degrees of Kevin Bacon” based on the assumption that any actor in Hollywood can be linked through their film roles. Aficionados of the game give actors each a “Bacon Number”, the late Donald Pleasance is designated a three which translates that only four hops are needed to link him to any actor alive or dead. Christopher Lee of Hammer House of Horror fame is a two, while Rod Steiger is an incredible one. Kevin Bacon at first thought that using his name meant that he would take any role available to him, but it’s only that his name that rolls off the tongue rather satisfyingly. He has taken all this in good part and now fronts a charitable organisation launched in 2007 entitled www.sixdegrees.org.

This separation has worked well when associated with clusters; it’s the way that man has always conducted his life, it is for this precise reason Milgram’s experiment worked but only if kept within a social circle. In the Hollywood cluster the most jumps entailed by an actor is four, but you would be hard put to link Kevin Bacon with, say, a goat herder in Azerbaijan. That is until now.

If you should get into my cab my passenger list will give you a much wider separation group. While the rise of the social media gives you “followers” and “friends” increasing your circle exponentially. Follow Stephen Fry on Twitter and when I last looked he had three-and-a-half million followers to link with.

Now for reasons best known only to themselves researchers in Italy have looked at Facebook’s 721 million users – which equates to 10 per cent of the world’s population – and concluded that the average distance between two individuals has shrunk to 4.74 hops. This means there are just four people standing between you and that Afghan goat herder.

So this Christmas play Six Degrees of Kevin Bacon at home and should you feel the urge to wish your new found friend in Azerbaijan a seasonal greeting: