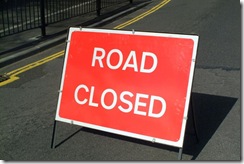 Listened on the radio today and they said there are now over 580 different scheduled road works in London, that’s not including any emergency works that crop up. Thames Water when asked for a date of completion of their much vaulted ‘Replacing London’s Victorian Water Mains’ have said it will be finished in 2035 yes!, you read right, 2035.

[T]he Victorians built the water system quicker than Thames Water are fixing it by inserting plastic sleeves into the existing pipe work. Just one example Cromwell Road the major route out west was started on 10 July and will take 18 weeks.

And do you know, I think these holes are dig by leprechauns, because I never see anyone working on them.

Why don’t they just converge on an area and work three shifts all day and night until the job is done? They say night work is not possible because it disturbs the residents, I would have thought traffic jams day and night outside your bedroom window might be a little irritating.

Are they really trying to stop London’s traffic, the bendy buses on diversion around the Oxford Street hole have jammed up half of the West End?

Some of these holes are untouched for weeks, is it beyond the wisdom of Thames Water to complete one excavation before they start another?

They can’t even get the signs right; a roadwork’s sign in Hyde Park reads ‘delayes suspected’. Is this a case for Inspector Morse? Should not the Education Secretary, the appropriately named, Ed Balls, be complemented on the rising exam result passes?