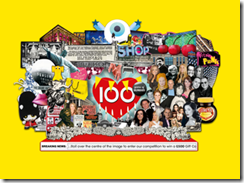 On Monday 15th March Selfridges Department Store at the Marble Arch end of Oxford Street celebrated its centenary having opening in 1909.

Here is the story of its founder taken from CabbieBlog’s Hidden London.

Gordon Selfridge the American department store magnet was an interesting fellow who provides a salutary moral lesson for us all.

[G]ordon devoted his productive years to building Selfridges into Europe’s finest shopping emporium. During that time he led a life of stern rectitude, early bedtimes and tireless work. But in 1918 his wife died and the sudden release from marital bounds rather went to his head.

He took up with a pair of Hungarian-American cuties known in music-hall circles as the Dolly Sisters, and he fell into rakish ways. With a Dolly on each arm he dined out every night, invested foolish sums on racehorses, cars, the casinos and even bought a castle in Dorset. In ten years he had spent $8 million, lost control of his department store, his racehorses, Rolls Royces and his castle. He ended up living in a small flat in Putney and travelling everywhere by bus. He died penniless and forgotten in 1947, with a smile on his face thinking of the time he had shagged the twin sisters.