Have you ever thought about the number of Thames crossings there are? On The Knowledge, it was something to be memorised, amongst so much else.

Mnemonics was the answer: We Have Water Below Moving Soft London Turds: Gave you the bridges across the Thames from West to East: Westminster, Hungerford, Waterloo, Blackfriars, Millennium, Southwark, London, Tower.

That’s all fine and dandy for road crossings, but what about all the other ways to cross that watery barrier?

The crossings have to be accessible to humans, not fish swimming in the murky depths or rodents scurrying along utility tunnels.

Some crossings have various similar means to cross, trains for example will be counted as a single crossing unless one is Overground and another Underground, then that’s two crossings.

How many different places does the tube cross the Thames?

The Jubilee line traverses the murky depths an impressive four times in nine stops, yes somebody had to count this.

That makes a total of 11 routes to cross the Thames on a London Underground line.

That’s a total of 25 roads and/or footbridges to cross the Thames within London.

Crossing the Thames via tunnels, either road or pedestrian from east to west.

Inspection tunnels that are closed to the public have been excluded, they are: Tower Subway, two tunnels beneath the Thames Barrier and other utility tunnels.
Blackwall Tunnel (two counted here)
Rotherhithe Tunnel
Woolwich Foot Tunnel
Greenwich Foot Tunnel

That’s a total of 5 pedestrian/vehicle tunnels traversing the Thames.

Once this was the only way to cross the Thames, so boats and ferries have to be included.
Woolwich Free Ferry
RB4 RiverBus Service, running from the Doubletree Docklands Hotel in Surrey Docks, straight across the river to Canary Wharf Pier by Westferry Circus
Hammerton’s Ferry between Ham House and Marble Hill in Twickenham

For the pedants, there are the hop-on, hop-off services provided by the likes of UberBoats by Thames Clippers, but as the U Word is in their title we’re not counting those multiple methods of crossing the Thames.

So we’ll just say a total of 3 boat and ferry services offering direct routes across the Thames.

In addition, the cable car between Royal Docks and North Greenwich, whatever they call it this week, is included.

The total number of ways to cross the Thames by this count is 59, and if anyone can make up a mnemonic to remember that number please leave it in the comments section. 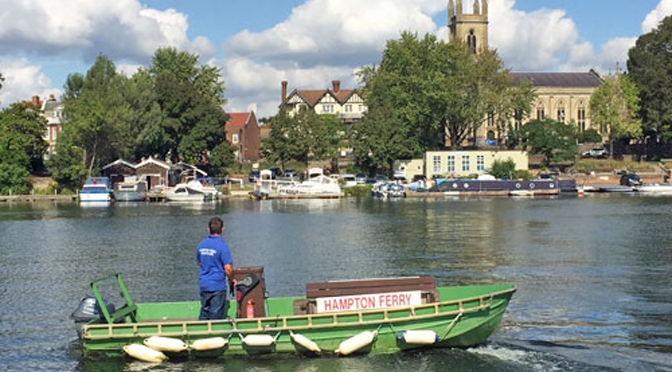 Lately, on CabbieBlog, we’ve had London’s oldest flyover and the oldest bridge still in use.

For many years the medieval London Bridge was the only means to cross the River without using a boat. The footprint of these past ferries remains, Horseferry Road, Westminster, numerous Ferry Lanes, Tottenham, Dagenham, Haringey and East and West Ferry Roads on the Isle of Dogs.

So where are London’s oldest working ferries? Well, there are only two contenders, the free ferry service at Woolwich and Hampton’s ferry.

Since at least the 14th century there has been a ferry service on the Thames running between Woolwich North to the south bank at Woolwich. In 1810 the army established its own ferry that ran from Woolwich Arsenal to Duvals Wharf. In 1811 an Act of Parliament was passed to establish a ferry across the Thames from Woolwich. In 1889 a free passenger and vehicle ferry service started operation. By the early 1960s, increasing demand saw the paddle steamers retire and the ferry service upgraded to a roll-on/roll-off model. It is currently run by Transport for London.

Another still operational ferry service is the Hampton Ferry, which can only transport pedestrians, operating on the Thames about a mile west of Hampton Court Bridge between Hampton on the north bank and Hurst Park, Molesey, on the south bank.

Dating from 1514 it provided a service for agricultural workers and fishermen. It was incorporated by statute, making it one of the oldest British companies. The ferry, which costs £2 for a single crossing, operates from April to October.

At 215 miles the River Thames is the longest river entirely in England, and mightily lovely it looks in parts. But there’s another…

Yes, London’s famous river has an American cousin, but with one difference, just like Americans inexplicably call a pavement a ‘sidewalk’ this is the Thames River, not the River Thames, but it turns out not everything in America is bigger.

A mere 15 miles in length from its mouth to the shores of Norwich, the Thames River is an estuary, a span of brackish water that ebbs and flows with the tides, and has on its bank New London. Until 1658 when they named New London the river has had many titles, originally known as the Pequot River after the Pequot Indians who dominated the area, other early names include Frisius, Great, Great River of Pequot, Little Fresh, Mohegan, New London, and Pequod, then the river was rebranded Thames River after the River Thames.

Apart from nomenclature, it has some remarkable similarities with its larger namesake. They once had an ice fair on the Thames River, around the winter of 1903-4, something not seen in London since the Victorians narrowed the river.

London had Deptford Dockyard and along its banks saw the building and launching a slew of behemoth ships, including, of course, Brunel’s SS Great Eastern.

New London’s answer to Deptford is the world’s first submarine base, which, in 1954, was the launch site of the Nautilus, the first nuclear-powered submarine.

But my favourite connection is the university boat races. We have the annual between Oxford and Cambridge universities, while Americans gather on the banks of the Thames River each summer, to cheer on competitors in the annual Harvard-Yale Regatta. A lovely little coincidence.

Unfortunately, the way you pronounce the two rivers’ names is different, yes we’re back to the potato/tomato discussion. Our transatlantic cousins for reasons best only known to themselves pronounce the Thames to rhyme it with ‘James’, and I suppose any footpath alongside is a sidewalk. 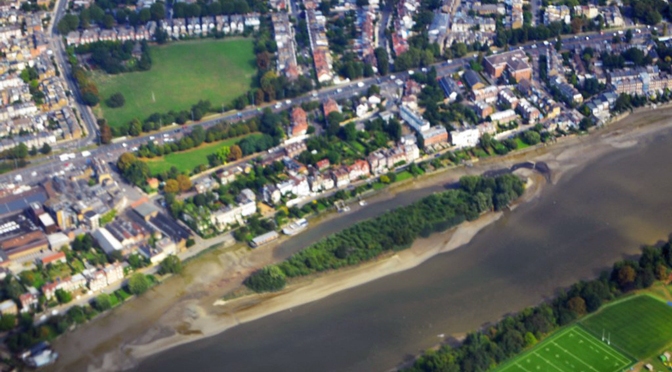 One of the conundrums when working as a London cabbie is, just where do you stop for lunch? The public’s perception that we all meet at a convenient diner is true for some, but where do you take your break if you’re on the other side of London?

One of my favourite watering holes, in more ways than one, was Chiswick Mall with its Georgian and Regency houses strung out along the River Thames.

Opposite these houses in the river is the Chiswick Eyot, the first major island you come to in the Thames if you’re travelling up from central London.

This island is an eyot, one of 120 islands in the Thames, each with its unique character and atmosphere, some have many people living on or around them in bungalows or houseboats, but like the Chiswick Eyot, some are completely uninhabited and are all the more mysterious for it.

The Chiswick Eyot is a protected nature reserve, and can completely flood on the fast-moving high tides – there are warning signs planted there telling you so. With permission at low tide, you could wade out to the eyot, but even then it would be at your own risk of the tide advancing.

At low tide, the island rears up before you, with a long raised bank around this four-acre lump of land covered at one end with clipped willow trees that once grew on many of the Thames islands. The willows were used to make baskets for the London markets and crayfish pots. This is the last place where basket makers still come across and cut them anywhere on the Thames, keeping alive an ancient craft.

The island is incredibly unstable, such is the force of the Thames’s tides that it is subject to continual erosion, and if it wasn’t for the work of volunteers who have helped to shore up its banks, it would have been washed away by now. This means that historically the island was much larger. Even today it’s constantly in danger of falling apart completely.

Unfortunately, the island is also being invaded by Chinese Mitten Crabs, a species of crab thought to have been introduced to the Thames estuary about 1935, arriving here as a by-product of intercontinental shipping by clinging onto the hulls of ships. The crabs burrow into muddy banks and create complex interconnected burrows. The consequences for Chiswick Eyot are potentially disastrous, as the crabs’ burrowing loosens the mud around the eyot, and when the tide flows in and out, the earth is washed away, steadily eroding the island over time.

The writers and printers of the 1500s didn’t have access to etymology dictionaries, so they sometimes mixed up Latin and Greek words. That’s what happened with the Latin name Thames.

Of course, it’s spelled ‘T-h-a-m-e-s,’ even though it’s pronounced with a simple ‘t’ sound. The word has Celtic roots, and it has been around since Old English. It had always been pronounced with a simple ‘t’ sound at the front, but in late Middle English, it started to pick up the modern TH spelling, presumably because it resembled some of the Greeks words that were coming into English at the time like the Greek word teme which became theme after the spelling was changed. So the Thames got a TH as well, but the pronunciation didn’t change to reflect the new spelling. The name was probably too common and too familiar to English speakers for the pronunciation to be altered by a spelling change.

Taken from The History of English Podcast by Kevin W. Stroud.