The chances of finding an Oxo cube at Harvey Nichols’ Oxo Restaurant are practically nil, and finding a manufacturer of a meat cube, or any other product for that matter, fronting the Thames is equally zero. But once in this part of London was a veritable manufacturing base.

The site was saved from demolition by the Coin Street Community Builders who wanted to retain their community’s integrity was once where the royal barges were stored.

[O]xo was invented by the wonderfully named chemist Professor Justus Freiherr Von Liebig, who in addition to improving our Sunday roasts; discovered nitrogen was an essential plant nutrient.

His scientific skills did not transfer to marketing when he founded a gravy company with the catchy title ‘The Liebig Extract of Meat Company’ or LEMCO which produced a thick liquid of – well – meat extract containing 4 per cent salt.

The clever professor died in 1899 and with him went the meat concoction many couldn’t afford along with the LEMCO branding, which sounded more like a cold remedy.

Rebranded Oxo for reasons lost in the mists of time, but in all probability derived from ox, a ten-year research programme gave us the much cheaper beef cube we know today.

A power station had been built at Gabriel’s Wharf but by 1920 it was defunct and the Liebig Company bought it to convert to a cold store.

The savvy Oxo Company wanted to advertise their product to Londoners; they had proved its popularity by supplying the armed services with 100 million cubes during World War One.

The local authorities were adverse to outside advertising, the electronic billboards set up in Piccadilly’s London Pavilion in 1923 were considered too crass. So when Oxo applied to display their fine product it was refused.

Fortuitously the company was no more the Liebig Extract of Meat Company so Albert Moore, the company’s architect when adding a tower atop their cold store produced a 10ft tall artwork by created by piercing holes through the wall, one an X shape and two on either side forming circles. The local authority accepted this as building decoration rather than advertising, giving us the Oxo tower we know today. 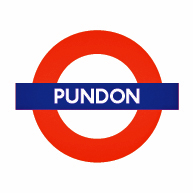 I think that it must be a bloke thing for every time I point out a great pun Mrs. CabbieBlog just gives me a withering look as if to say ‘will he ever grow up’.

To see a really clever pun whilst driving around London can make my day.
Wok-u-Like for takeaway Chinese; Jack the Stripper, if you haven’t guessed he strips doors for a living; or one of many fish and chips shop puns – Prawnbroker.

[S]ome would have been a great idea at the time, I imagine concrete supplier Jim’ll Mix It now wishes they hadn’t been so clever, or driving around in a pink van with U-benders advertising your ability to unblock drains is a bit close to the knuckle. 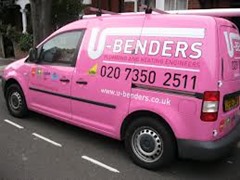 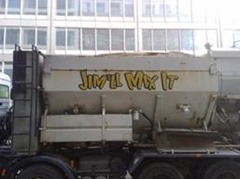 So here is a selection of my favourite London puns, If you have seen some pun fun send them to The Punning Man, or if they are worthy of Pundoners send them to CabbieBlog. 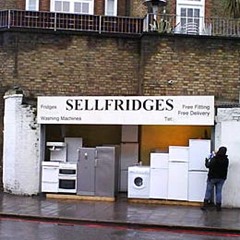 Sellfridges – Northwold Road Stoke Newington is my all time favourite. It works in so many ways. His business is emblazoned over the shop, he is getting free publicity on television with the series Mr. Selfridge and if a big cheese from Oxford Street happened to come by they would make themselves look rather silly by taking him to court.

The Codfather – Dock Street. I photographed this through the cab window before the chippy went to the fryer in the sky; alas Brando will not be behind the counter with an offer you can’t refuse. Now another anonymous block of ‘executive apartments’. I believe this could be the first Codfather, there are now many similar, what I like that the sign was a spoof on the original poster for the film.

Highly Sprung – Battersea Park Road. I must have passed this a hundred times but it took Tanksalot to draw my attention to this emporium of bedding for middle class neurotics. 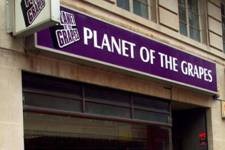 Planet of the Grapes – Queen Victoria Street. This nod to a bygone film has been around since man first roamed the planet, or is that after he left. 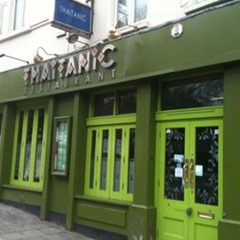 Thaitanic – Crouch End Hill. Now it either seemed like a good idea at the time, or their history was a little rusty. Whatever the reason this restaurant has now sunk without trace. 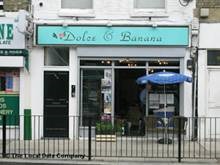 Dolce & Banana – Munster Road. This really could only work in Fulham. Selling, and I quote, ‘sweet bananas dipped in fine Belgium chocolate, sprinkled with a variety of sweet and salty toppings’ under a pun like that in East London, the locals would think you had gone, well bananas. 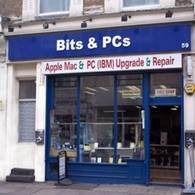 Bits & PCs – Westbourne Grove. Clever one this, is it bits and pieces or are they politically correct located as it is a stone’s throw from the luvvies in Notting Hill. 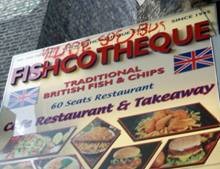 Fishcotheque – Waterloo Road. I’ve eaten here a few times and to my recollection ABBA have never appeared dancing between the tables. 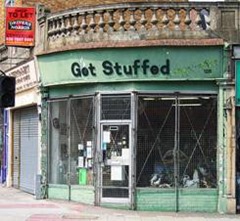 Get Stuffed – Essex Road. I think this is just a shop front for it is never open should you have an overwhelming desire to stuff your house with dead animals. Photo from London Shop Fronts (CC BY-NC-SA 3.0) 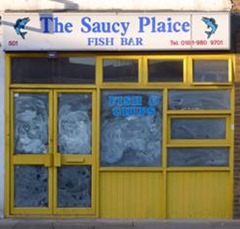 The Saucy Place – Roman Road. This is another example of a fish that is dead in the water. They don’t seem to have puns with chippy names out East. Photo from London Shop Fronts (CC BY-NC-SA 3.0) 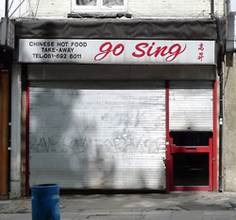 Go Sing – Lewisham Way. Do you have to Singh for your supper here or do you sing your hook. Either way I think it’s a gonner. Photo from London Shop Fronts (CC BY-NC-SA 3.0) 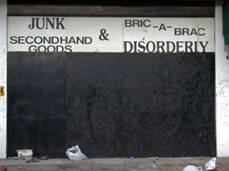 Junk & Disorderly – Old Jamaica Road. The whole road was later junked for a massive new apartment quarter, Bermondsey Spa; mind you it probably got some business before the demolition of its neighbours.
Photo from Shopfrontelegy. 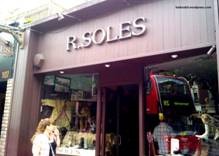 R. Soles – King’s Road. This one is clearly aimed at its young clients. There are probably half-a-dozen girls outside now giggling. 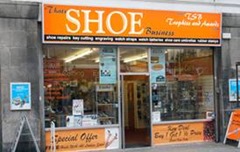 That’s Shoe Business – Leather Lane. This works in so many ways. It implies that they are as professional as actors with as much panache and its location couldn’t be bettered – Leather Lane, unless, that is, they sell plastic shoes. 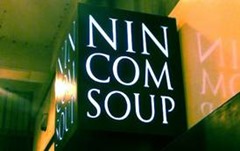 Nincomsoup – Old Street Station. It does what it says on the tin, sell soup to nins or nincompoops. 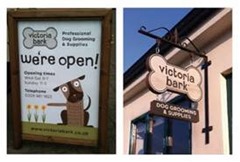 Victoria Bark – Grove Road. This proves that someone from East London understands a good pun. You’re located near Victoria Park and cater for dogs; you would have to be barking mad to miss using the pun.