It started as a promising day, the sun was shining, we had a new Government and yes, I had earned enough to warrant a trip to the bank. I proffered my deposit, the cashier smiled and said good morning, and then her eyes alighted upon a £50 note of mine. In a nanosecond a money checker detection pen appeared and like a censor from the Lord Chamberlain’s Office she had drawn a line across the note.

[R]apidly striding off to WH Smiths, and taking the cashier’s advice to purchase for myself said detector pen, my mood darkened. In an effort to cheer myself up and repair my dented ego, I did a bit of research on counterfeiting and also to confirm that I wasn’t the only London cabbie to get caught.

As a large city London has vast sums of cash changing hands each day, and this makes the Capital a perfect place to distribute this worthless junk. This was recognised in the Middle Ages and they used some rather novel methods to deter offenders.

Clipping was a popular past time in this period, where small clips were taken from the edge of a coin and using them to mint a counterfeit. Coin clipping is why many coins have the rim of the coin marked with stripes, text or some other pattern that would be destroyed if the coin were clipped, a safeguard attributed to Isaac Newton, after being appointed Master of the Mint.

Unlike today the threat to England’s economy from counterfeiting and ultimately the country’s security was appreciated by Parliament and offenders had a multiple choice of punishments, ranging to having one’s ears removed to hanging.

The Treason Act 1415 was an Act of the Parliament of England which made clipping coins high treason and punishable by death. (It was already treason to counterfeit coins.) The Act was repealed by the Treason Act 1553, and then revived again in 1562. The Act originally only protected English coins, but was later extended in 1575 to cover foreign coins “current” within England. The Coin Act 1575 also abolished (for coin clipping only) the penalties of corruption of blood and forfeiture of goods and lands (see what I mean by multiply punishments).

In modern times fraudsters have now a range of aids to perfect their craft making detection harder, so there is far more counterfeit currency in circulation. Remarkably last year the total amount of fake £1 coins hit 37.5 million, the highest sum since the coin was introduced in 1983, and a rise of 26 per cent since 2007, when 30 million were found to be fakes. Even more remarkable is that convicted forgers these days retain their ears, and only serve the shortest of sentences.

[D]epressed? Worried about the austerity measures promised by our new Political Masters? Before you decamp London for pastures new, consider this if you may, as CabbieBlog gives you the 10 years you really should be anywhere else but in our capital city:

Everybody has heard of the Great Fire of London in which only nine people lost their lives, but this one was much worse, leaving 3,000 dead according to medieval accounts. The conflagration led to new laws requiring the use of brick and tile for rebuilding instead of wood and thatch.

The wise would have left long before November when the Black Death struck the Capital. With crowded streets and bad sanitation making the contagion spread even faster. By the time it had run its course half the population of England would be dead. Afterwards wages increased due to the chronic shortage of labour.

With revolting peasants marching on London, the teenage king Richard II seeking refuge in the Tower of London. Prisoners released, palaces ransacked and burned and the Archbishop of Canterbury beheaded, scores of lawyers were also beheaded, so the year wasn’t all that bad.

Call it what you like; dropsy, griping of the guts, wind, worms or the French Pox (we always like to blame the Frenchies), the Great Plague killed 100,000 that year. Manufacturing collapsed as Newcastle colliers refused to deliver fuel to London, and with servants ransacking their master’s empty mansions.

The Great fire destroyed 13,000 houses; 87 churches; 52 livery company halls; 4 prisons; 4 bridges; 3 City gates; Guildhall; the Royal Exchange and Customs House. The City was rebuilt within 6 years, so good news if you were a builder, not your day if you owned the bakery where it started.

It wasn’t until Parliament had to be evacuated because of the smell from sewers disgorging effluent into the Thames that an efficient sewage system was commissioned. After a long dry hot summer and a cholera epidemic caused by the insanitary conditions it was known as the Great Stink.

If the Great War wasn’t bad enough, returning soldiers brought back with them the flu virus. Killing more than the war, London was especially vulnerable with its densely packed population transmitting the contagion more effectively. By the time the virus had run its course 220,000 Britons had died.

On the night of 29th December Hitler sent hundreds of bombers to destroy London, the ensuring firestorm left 436 dead and ultimately damaging or destroying 3.5 million buildings by the time the Blitz was over. The blackout also caused the country’s highest ever traffic casualty figures.

In December sulphur dioxide combining with rainwater and oxygen to form deadly sulphuric acid suspended in a dense fog and lasting for seven days killed 4,000 residents, together with scores of livestock at Smithfield. The Clean Air Act stopped the problem and an excuse for children to bunk off school.

I’m beginning to suspect that London cabbies are reviled with the same vigour as bankers, estate agents and MPs (well, maybe not as much as our Members of Parliament). Recently a colleague of mine had his rear window smashed by local children as he sat waiting in a traffic jam in East London. Previously like me he’s had stones thrown at his cab, and had pedestrians hitting his vehicle with their hands as they cross the road.

[I]t also makes you wonder why some Lycra louts of the cycle world get their kicks out of spitting at cab drivers. This Lycra-clad posers cycle up beside cabbies and spit in their face before peddling off, which I personally consider it the most offensive assault possible and rather cowardly when you realise how difficult it is to pursue the obnoxious assailant responsible, I now find myself asking the question, is it a new craze?

The whole practice has me wondering whether they only target cab drivers, like the young vandals who throw stones. Do they maybe mark up their hits on their bike frames, like World War II fighter pilots? Or perhaps it’s an individual avenger who was once wronged by a cab driver who refused to go South of the River and is now wreaking his revenge.

I suppose we could try fitting spittoons on the side of the cab – but well away from the driver’s window of course!

Are we all really so bad?

Poison pen letters are invited to the comments section at the bottom of this post. 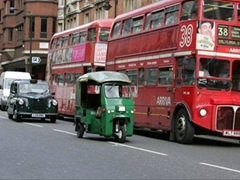 Our first city is at the cutting edge of information technology providing multi-lingual customer services to the world, while the second is struggling to provide high speed broadband access for its customers. One is taking its population out of poverty with the World Cities Study Group ranking it as an ‘Alpha world city’, while its counterpart has a rising unemployment rate of 9.4 per cent of the workforce with increasing numbers are reliant on the State.

[T]he first city was placed seventh in the list of ‘Top Ten Cities for Billionaires’ by Forbes magazine and first in terms of those billionaires’ average wealth. The other’s economy is not so rosy with the government forecasting its debt will soar to an eye-watering £1.1 trillion by 2011.

The emerging city’s transport has 11 million passenger movements a day on its rail and bus services, in comparison with about half of that number who have to endure delay and breakdowns with the other city’s aged transport infrastructure.

With 24,000 cabs providing transport for the older city’s 7 million population the emerging city’s population of 14 million inhabitants are having their aging fleet of 55,000 cabs replaced, unfortunately in the older city, whose cabbies have been licensed for over 350 years, they have to provide a service with much older vehicles due to their extortionate replacement prices.

Similarly both provide a rickshaw mode of transport. One regulated by price and service provided by operators who know their city like the back of their hand, the other’s rickshaws are vastly overpriced, unregulated (charging what they think they can get away with) and, driven by foreign ‘students’ who’s inability to speak the native tongue is match by their navigational skills around a city founded by the Romans.

Drivers in the city of the sub-continent sound their horn at every opportunity and in some ways this is where there are similarities with drivers in the older city following suit.

As the excellent Channel 4 series of programmes entitled Indian Winter showed, Bombay (or as the BBC insists on calling it, contrary to what it’s known to the inhabitants, Mumbai) has many lessons which we Londoner’s could learn. Could it be that Bombay’s emerging dynamism has positioned it in a far more advantageous place in the world’s economy?

With London appearing in a downward spiral and Bombay’s pulling itself up by their bootstraps it’s only a matter of time until the former colonial power is overtaken by its former colony.

We Londoners consider ourselves to be citizens of the world’s most influential city, true it still has a lot to offer its residents but is now under threat from emerging economies as never before, but at least we have recently adopted the curry as our favourite meal.