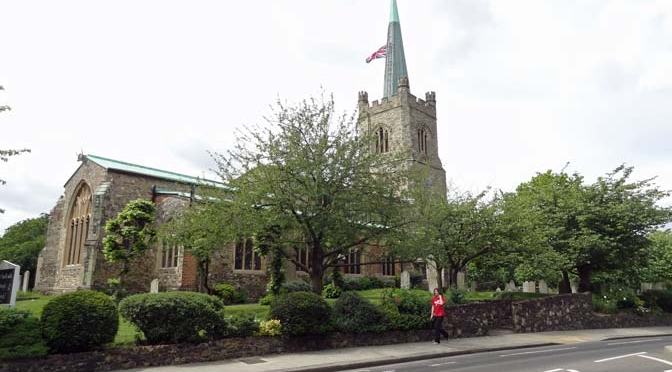 With climate change at the top of the news agenda, it’s a question on everyone’s lips: Just where did the last ice age stop its advance?

Now thanks to Diamond Geezer we have the definite answer – Hornchurch or more precisely Maywin Drive, just north of St. Andrews Church.

In 1892 the Romford to Upminster branch line was constructed which involved digging the 25ft deep Hornchurch Cutting, in so doing an unexpected seam of boulder clay overlaid by sand and gravel was exposed.

The Essex Field Club investigated the excavations (presumably trains weren’t yet in operation) and discovered several Jurassic fossils that could only have been carried from the Midlands by an ice sheet.

Since then, with all of the construction taking place in London, no such glacial deposition has been found further south than Hornchurch, which has led geologists to conclude that Maywin Drive was the ultimate limit of advancing ice during the last 2 million years.

It wasn’t so much the glacial deposits as the gravel on top of them, because normally that’s found underneath. This was evidence that the Thames was younger than the fossils, confirming that the Thames was diverted to its present course after the arrival of the ice sheet. Hornchurch is the only place this layering of Thames gravel and boulder clay has been seen, hence the only location that confirms precisely when the big shift took place.

Confirming the ice sheet hypothesis, in the 1970s a new electricity sub-station was built in a former gravel pit behind St. Andrew’s Church and quarter-of-a-mile to the south of the Hornchurch railway cutting.

Here more boulder clay was found but no further glacial deposits could be found confirming that the sub-station was further south than the ice sheet had advanced.

St. Andrew’s has a further claim to scientific fame, Rev. William Derham was rector of Upminster from 1689-1735 and a friend of Sir Isac Newton (he of gravity fame) and Dr Edmund Hailey (his meteor). The Rev. concluded death-watch beetles, apart from infesting his church, could eat their way out of a wooden box.

But his greatest achievement was calculating the speed of sound. Standing on St. Andrew’s Church tower he observed the difference in time the flash from a gun fired in Aveley and the sound reaching him. Repeating the experiment from several locations he calculated the speed of sound at 768mph, only 8mph out from the actual speed of 760mph, not bad for 1705.

Featured image: St Andrew’s Church Hornchurch, London, location of just south of the furthest that any ice sheet in Britain reached during the Anglian glaciation 450,000 years ago by Dudley Miles (CC BY-SA 3.0).