First a confession. Those of you of a more inquiring mind will have spotted on the sidebar an advert for my ‘soon-to-be-published’ autobiography. In fact, those of you who have been good enough to become Patrons should, by now, have received a personalised copy.

That was before the pandemic struck

But first a few statistics. You would have thought with half the population sitting at home with little to do, book sales would have boomed last year. Alas, the sales didn’t reflect this. Global sales of printed books by British publishers plunged by £55 million in the first six months of last year, as schools and bookshops remained closed due to coronavirus. Conversely ebooks, after six years of declining sales were up by 17 per cent, boosted by the scrapping of VAT, and those staying at home have increased sales of audiobooks by 42 per cent.

The fall by 12 per cent of book sales has not been consistent across all genres. Write a cookbook, advice on healthy lifestyle (ironic with many lounging around at home in their pyjamas), or children’s books you were on a winner, especially if the title started with A Pinch of Nom, having two titles in the top five sales.

On the other hand, memoirs have faired rather badly, which leads neatly to Everyone Is Entitled To My Opinion. Michael Joseph, a subsidiary of Penguin Random House, had given me a publishing agreement; accepted the manuscript; spent some considerable time on the developmental edit by the same editor who worked on Jeremy Clarkson’s books, aided with input from a successful television scriptwriter whose credits include The Now Show and The News Quiz; before being copy-edited by myself. Only the final proofread was required. 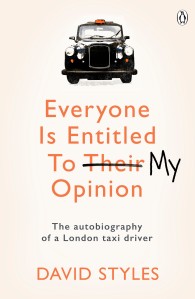 Now the memoir has been given back to me with thanks and apologies, which leaves me with 80,000 words and nowhere to go, and more importantly nothing to give supporters of CabbieBlog.

So should you want a taste of Everyone Is Entitled To My Opinion here is a short extract:

The last outpost of the British Empire

Entering the old Public Carriage Office in Penton Street you might have just wandered into a 1960s police station, which it really was in all but name. A lady of advancing age was positioned at the entrance vestibule, her job was to check the visitors’ credentials, although her only concession to security was to occasionally ask to see the Appointment Cards of those destined to an Appearance. She was more likely to ask of Knowledge Boys how they managed to answer the questions than check on anyone entering the building. Upstairs, on the second floor, was a wall of reception desks with heavy wooden surrounds much like a railway ticket office in a 1930s black-and-white film, each of the windows with its designated use indicated by signs above in bold black type. At one, you were required to book-in, a minute late and you risked being turned away that day and directed to the adjacent desk boldly marked booking-out.

They say predators can smell their prey when it is nervous, well the waiting room had the brain chemical serotonin permeated into its walls. Inside chairs were placed around the edge of the room with a coffee table in the centre. Upon the table were publications waiting to be read, not that any in that room were ever in a mood to peruse this informative literature.

Each applicant carried their Appointment Card, known by many nowadays as a scorecard. On the reverse you were informed, should it have inexplicably slipped your mind: ‘Knowledge of London Appointments have been made as shown overleaf. This card must be brought at each attendance and presented at the Knowledge of London window, 2nd Floor, on arrival.’ Your Appointment Card contained the obvious information as to the time and date of your Appearance, in addition after an Appearance, scribbled in pencil in the upper right-hand corner was a series of three sets of letters each separated by a shilling stroke. These were the Rosetta Stone for Knowledge Boys, these hieroglyphs were the code as to who was likely to be your next inquisitor, but as in archaeology, the marks were hidden, having been erased by the booking-out clerk, so before making another appointment the more astute would quickly copy the code to be prepared for their next Appearance. If the letters OR were among those indicated, you stood a one-in-three chance of getting the frightening Mr Ormes. In fact, if Mr Ormes called another from the waiting room, a smirk could be detected on the face of any other who had seen those dreaded markings upon their card.

Once called you were expected to answer with “Yes, Sir”, before following the examiner along the ‘corridor of fear’, as it became known, to their office. The utilitarian decor, with its grey lino flooring, cream painted walls, now turning grey and heavy wooden doors, the building could have been used as the blueprint for the Stasi state security headquarters.

At this point, you are probably asking: “So what’s different from when I sat for exams in college, or being summoned to the master’s office at uni to account for an indiscretion?”

The Knowledge, of course, is a test of the applicant’s knowledge of London’s 22,000 streets and what is to be found upon those streets. It also is a test of character. According to research for the Discovery Channel’s 2006 Hard Labour programme, London cabbies top the list of the ten most ‘arduous’ jobs in Britain, even ahead of trawlermen and lumberjacks. The reasons given for putting cabbies at the top of this list were ‘the nightmarish state of London’s road network’, even worse now since the bike lanes arrived, and ‘the stress of dealing with abusive and frequently drunk passengers’. The problem is exacerbated by having to deal with these problems on your own, and if the situation starts to get out of hand the police are unlikely to come to your aid.

Each Public Carriage Officer, who had once served in the Metropolitan Police, had been very inventive in formulating their own tests of the applicant’s suitability, a polite way of describing how they intended to intimidate and humiliate any prospective London cabbie. Upon entering their office you sat on a small chair positioned in the centre of the room, moving the chair was forbidden, while the examiner sat at his desk behind a high sloped board so that only his upper face was visible. The board also had the advantage of obscuring from the applicant what the examiner was doing, this often was used to heighten the tension as he ignored his victim pretending to be engrossed in some important paperwork concerning the Knowledge Boy who was rapidly losing weight worrying about his fate.

Not for nothing has the Public Carriage Office been described as ‘The last outpost of the British Empire’. Strict discipline was enforced: a suit and tie to be worn by the applicant; never refer to a Carriage Officer by name, always calling him Sir; only speak when spoken to, and never to question, only obey.

2 thoughts on “Nowhere to go”