Eighty-five years ago saw the arrival of the first Monopoly game and looking at my pre-war version it would appear that when the selection of properties to include they made, some rather curious choices were decided upon.
The game didn’t reach the shops until 1936, Victor Watson upon seeing his first version on a Friday in December 1935, didn’t waste any time. Prompted by his son he made a trans-Atlantic call (rare at the time) and had signed a deal with Parker Brothers in America to license the game by the end of the weekend.
Over 20 million sets have been sold in Britain. Silk maps were hidden inside Monopoly boards and sent to Allied prisoners, inspiring Get Out Of Jail Free jokes; and once the Great Train Robbers played Monopoly with real stolen notes while holed up in a Buckingham farmhouse.
But back to the rather idiosyncratic choices for my original board.
Why is there an American car with whitewall tyres on Free Parking or a New York policeman instructing me to Go To Jail? And why is Piccadilly’s rent on a par with the cheaper yellows, when it should have been £2 more?
The tokens are, at best, random. A car and top hat for toffs; a rocking horse for children; and I suppose the iron, thimble and shoe were what 1930s women wanted) they did at least introduce a purse later to give women more independence). But where did the battleship and cannon come from just months before World War II?
Back to the 1936 board’s eclectic property portfolio chosen by Victor Watson and his secretary Marjory Phillips on a tour of London in a black cab. Was the cabbie reluctant to go ‘Sarf Of The River’ hence only Old Kent Road on the board is south London’s only property?

Ask a cabbie today for Vine Street and he would have a job locating a dead-end alley 70ft long behind Piccadilly. I was asked Coventry Street on my first Appearance for The Knowledge, most Londoners wouldn’t know it runs from Piccadilly Circus to Leicester Square and just a few hundred yards long. I didn’t know it at the time of asking.

The Angel, Islington purportedly was where Vic and Marg stopped for a cuppa at a Lyons Corner House tea room (did the cabbie join them?), but why was it included? Surely Pentonville Road, which runs into the Angel was a better choice, whilst following the board’s format of ‘roads’ and ‘streets’, except for Leicester Square.

Marlborough Street as far as know doesn’t exist now or then unless you include some rather upmarket council flats on the Sutton Estate in Chelsea. It’s GREAT Marlborough Street that the Marlbro cigarettes were named after as the company had their London office there.

Bond Street sounds rather posh but has niggled Monopoly purists for almost a century. Looking at my Geographers’ A-Z, three exist, one is 100 yards long adjoining Chiswick High Road, another in Ealing is equally as short, with a third a stone’s – or javelin’s – throw from the Olympic Park.

Unlike its companion, Knightsbridge which is an actual street (but not with Harrods on it), Mayfair is an area mostly owned by the Duke of Westminster. In the late 1950s, the Duke of Westminster agreed to allow the United States to demolish the whole of the west side of Grosvenor Square so they could put up the terrible building we see today. But the siting of the American Embassy led to one of the most bizarre and protracted processes of negotiation ever seen in London. 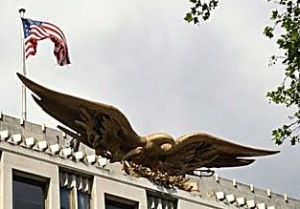 The Americans have embassies all over the world and in every single case, they buy the land first and then build their embassy. They assumed that this would be possible in England so they asked the Duke of Westminster, who owned Grosvenor Square, how much they would have to pay to buy the freehold of the land. What they didn’t know is that the Grosvenor family never sell. Their vast wealth is based precisely on this simple fact: they own three hundred acres of central London including most of Belgravia and Mayfair, not to mention land holdings all over the world. All the houses and offices on this land are leased; their freeholds are never sold.
When the Americans were told they couldn’t buy their land they insisted that was unacceptable and that they would petition Parliament to force the Duke to sell. Questions were asked in Parliament; the Grosvenor family were heavily leaned on but all to no avail.
Then the Duke thought of a good compromise. He told the furious Americans that if they were prepared to return to the Grosvenor family all those lands in the United States stolen after the American War of Independence then he would allow the Americans to buy their site on the west side of Grosvenor Square. The Americans knew when they were beaten (they would have had to give the Duke most of Maine and New York) and unwilling to hand over the land they had stolen from the Indians anyway, they backed down and the Duke of Westminster allowed them a 999-year lease. And that explains why the embassy in London was the only American embassy built on land not owned by America. Presumably, they own their sparkling new gaff in Nine Elms Lane.
Culling Greater London’s 45,687 streets into twenty-two during a weekend was always going to be challenging, in the 1920s London was the largest city the world had ever known and by 1935 it peaked at 9 million, so I suppose we will have the leave the London board as it has always been, or buy one of the many new permutations.