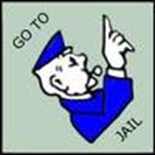 Here is another CabbieBlog excursion into my old 1930s Monopoly set that I found in the attic, this time crime and punishment is featured in our less enlightened times.

Take the punishment meted out to banker Henry Fauntleroy. Having been found guilty of defrauding the Bank of England of £250,000 (today’s Masters of the Universe wouldn’t get out of bed for that trifling amount), his public hanging on 30th November 1824 outside Newgate prison attracted 100,000 people, the largest ever crowd to watch a public execution. Unpopular, not for being a banker, but for squandering the money that he managed to steal from the English people.

FLEET STREET
Taking its name from the river nearby, the Fleet Prison was one of the most feared penal centres in London.

The prison provided the starting point for public whipping where offenders were forced to walk the length of Fleet Street to Temple Bar attended by a constable charged with whipping sufficiently hard ‘to make the back bloody’, when the punishment was over the victim could look up at Temple Bar which provided a convenient place to display the bloody decapitated heads of traitors. To stop the head being picked clean by birds it would be boiled in brine and cumin seed.

BOW STREET
Originally built in the shape of a bow it was once an elegant street that later became notorious for its brothels; it was also the site of Will’s Coffee House, a forerunner of Starbucks, where the famous would sit around talking nonsense all day. Home to Bow Street Magistrate’s Court until 2006, Henry Fielding started the Bow Street Runners here in the 18th century and his half brother John was a magistrate who pursued crime “with vigour and success”.

Although blind John Fielding was given the improbable credit of being able to recognise 3,000 thieves by their voices.

PARK LANE
As its name alludes to, Park Lane was once just a lane alongside Hyde Park, now a six-lane dual carriageway terminating at its northern extremity with Marble Arch. Once the site of Tyburn, the gallows there would, for the economy of scale accommodate 21 men and women at a time. Convention dictated the order of precedence, highwaymen as the “aristocrats of crime” were dispatched first presumably to ensure a higher number of spectators would attend before they became bored with the entertainment, next would come common thieves, with traitors being left to bring up the rear.

WHITEHALL
Half way down Whitehall lays Banqueting House the only remaining part of the old Whitehall Palace. It has a gallery where the King’s subjects could watch him dine. The ceiling by Rubens celebrates the benefits of wise rule, the irony of which is not lost on historians as the painted ceiling was one of the last things King Charles I would see before being beheaded for not listening to his people. His neck vertebrae was only recovered hundreds of years later when a horrified Queen Victoria discovered that her surgeon Sir Henry Halford was using it as a salt cellar for his fish and chips.