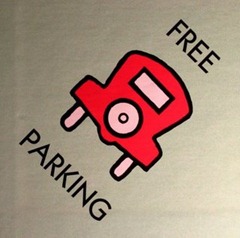 You can tell that Monopoly was devised in a more relaxed and gentler age. This, our second trip into Cabbie’s Monopoly, we find a square entitled ‘Free Parking’; for in the 21st-century free parking for cabs lasts just two minutes and one second before Westminster Council issue a ticket.

[M]Y PRE-WAR MONOPOLY SET has tokens comprising a thimble, hot hat and a flat iron more reminders of a bygone age; while this week’s four locations have changed beyond all recognition over the last 75 years.

OLD KENT ROAD
When designing the London Monopoly Board in 1936 they didn’t want to go Sarf of the River; a bit like cabbies are accused of saying these days. For the Old Kent Road is the only square on the Monopoly Board from our southern environs, and one of the cheapest. Gentrified nowadays in Southwark and Bermondsey, Old Kent Road remain stubbornly working class.

The route taken by Chaucer’s pilgrims on their journey to Canterbury, there aren’t even any decent watering holes left. The Dun Cow is a surgery and The Thomas à Becket has become a furniture shop.

THE ANGEL, ISLINGTON
Taking its name from a coaching inn that had stood on the site from at least 1638; I have often wondered what attracts the tree hugging, muesli munching, Guardian readers to this predominantly poor area.

So polarised is it that council tenants live cheek-by-jowl next to £¾ million terraced houses. I then learnt that the republican Thomas Paine, inspired by the French Revolution probably wrote the first part of his The Rights of Man while staying at the pub that gave its name to the area, the Angel in 1790, could the rich be trying to emulate him?

I sat there paralysed like a rabbit caught in headlights.

MARLBOROUGH STREET
Correctly entitled Great Marlborough Street and named in honour of John Churchill, 1st Duke of Marlborough. It is probably the slowest road in London for the pedestrian crossing outside Liberty’s is in constant use, still it gives you the time to look at the famous store with its façade constructed from the timbers of the Navy’s last two wooden warships, HMS Impregnable and HMS Hindustan. As a footnote Marlboro cigarettes take their name from the street which in the late 19th century the Philip Morris Company’s factory was situated.