It was an e-mail from the public relations department of a games manufacturer which prompted me to write this post, that, and a touch of post-Easter Festivities writer’s block.

Jim Walker a cabbie colleague of mine who grew up in the shadow of Tower Bridge has devised a three-dimensional board game “Bridge Up”. Characters like Little Maxi the London taxi move around the board while players have to answer trivia questions about the River Thames and the history of Tower Bridge. And to celebrate the launch of his board game Jim has been given the rare honour of pushing the button to open the London’s iconic bridge.

[A]fter that e-mail I remembered that my daughter had, as more of a joke, from a car boot sale bought for me another taxi based game – London Cabbie – which I’ve found recently on eBay retailing for £65.

The London Cabbie Game (1971) was invented by Drakes, Jarvis, Walsh and Gluck, which sound more like an Eastend solicitor practice than games inventors. The aim of the game is to make money, work out the best routes to get passengers to their destinations, whilst avoiding traffic jams. The four inventors clearly know something about cabbies as the board reassuringly doesn’t go South of the River. 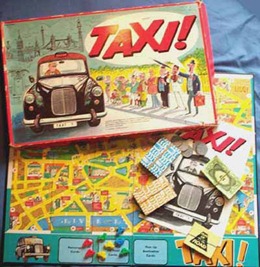 Another London cab based game is TAXI, which worked on the premise that it was more fun negotiating London streets on cardboard than on tarmac. This rather frivolous 1960’s game has among its passengers model Susan Scantly, Bubbles Dimpleby and Felix Softpad.

Although firmly stuck in that era, and featuring an old FX cab on the cover, whose driver looks as if he can afford to ignore a rather smart gentleman hailing him standing at the front of a queue, board game does at least cross the river, if only to the major stations. What is lacking, which no self-respecting cabbie today would be without, is a pair of boxing gloves or an England football shirt hanging from the mirror. 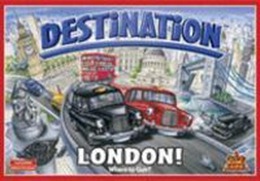 When Rachel Lowe pitched her game Destination London to The BBC’s Dragon’s Den entrepreneurs they criticised her in a variety of ways, turning down her idea. The game went on to become Hamley’s best selling game of 2004. She invented the game from her experience working as a cabbie in Portsmouth while studying for a law degree.

Players are, you’ve guessed it, cabbies, moving through the city visiting tourist sites accruing money. The format has been modified for other cities and has even a Destination Hogwarts.