Readers of a delicate disposition should log off now for today’s post is about well . . . spending a penny. 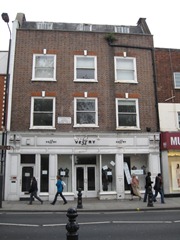 With a surname like Crapper you would have thought another choice of vocation would have been preferable, for apparently the derivation of the vulgar verb, is not taken from Thomas Crapper’s surname, as many believe, but comes from Middle English word crap itself a derivation from the Dutch Krappe.

This year marks the 108th anniversary of Thomas Crapper’s death, the man one could argue, who has improved all our lives immeasurably with his invention of the floating ballcock (another inappropriately named device), and although he did not invent the ceramic toilet he revolutionised the public attitude to toilets with the first bathroom showroom.

[T]HOMAS CRAPPER came to London from Yorkshire at the age of 11 in 1848, first setting up shop as a sanitary engineer on what is now Draycott Avenue, but later his firm that became celebrated for their water closets opened at for business at 120 King’s Road [see picture], his showroom alas is now an empty clothing shop.

Before Crapper, most of London lavatories relied on turning a simple tap on to flush the loo, the problem was that people forgot to turn off the tap, or left it to run as a trickle of water did not make for a particularly hygienic flushing system. As a result a dramatic loss of pressure in London’s water system.

Crapper’s system of course stored the water and then discharged the tank with enough force to flush away the solids. So convinced was he of his loos that he invited a bemused public into the works to see how a particular loo and cistern combination could flush away a dozen apples or several potatoes. Visits became one of the highlights of Saturday afternoons in Chelsea; it seems Edwardians were easily entertained.

Throughout history our ancestors have found ingenious ways to use them and we apparently spend three years of our lives sitting on them, so how did we get on without Thomas Crapper?

The Romans viewed going to the toilet as a social affair, they would discuss the news and gossip of the day and maybe even negotiate a business deal whilst they were there, the City wine bar of its day. Not surprisingly, toilet paper had yet to be invented; instead a piece of sponge fixed to a short wooden handle was used and shared by everyone.

In the Middle Ages, the wealthy built ‘garderobes’, little rooms jutting out from the walls of their homes. Garderobes, to ‘guard’ the ‘robes’ were also used to store clothes, as the smell kept moths away. It’s this medieval loo that we take the word ‘wardrobe’ from, but not everyone had such a luxury, many would have used chamber pots during this period, throwing their waste out of a window, shouting ‘gardy loo’ – Gardez l’eau is French for ‘watch out for the water’. In fact the City would fine householders if the detritus reached above a certain height outside their city homes.

The Tudors would happily ‘pluck a rose’ (as they called it) anywhere: in chimneys, corners of rooms or in the street. Toilets by then were often referred to as ‘the jakes’. Then in 1596, Sir John Harrington invented the first water closet with a proper flush. Queen Elizabeth I used it and was so impressed that she had a ‘john’ built at her palace, hence the expression of ‘going to the john’, however, it was not widely used elsewhere as it was expensive to install.

By the 1700s, the most likely place to keep your chamber pot was in the dining room, often in a sideboard. Chamber pots and commodes were commonplace even into the 1800s and if staying at a wealthy house, in your bedroom you could pull out the drawer and inside find a metal bowl ‘pee pot’, one for the man and another for the lady, which could be used and then emptied by the chambermaid in the morning.

It wasn’t until 1775 that Alexander Cummings invented the first modern flushing toilet, but later into the 19th century and the height of the British Industrial Revolution, the population in towns and cities increased, but the number of toilets didn’t. Neighbouring families would often have to share an outside privy, the ‘necessary house’. It wouldn’t be until 1910 that the toilet was changed to the closed water tank and bowl that we all know and love.

If you really want to know – here are some toilet facts

Gongfermors were the people who removed human excrement from privies and cesspits (gong being another word for dung). They were only allowed to work at night.

Royal loos were scrubbed out by workers called gongscourers.

In 1760 George II expired on the toilet.

People would tip ash from fireplaces and nearby coke furnaces on top of sewage to stop it smelling.

The normal charge to use a public toilet was a penny. People spoke of ‘spending a penny’ as a polite way of saying they were going to the loo.

Before toilet paper was invented people would use leaves, moss, stones, grass, rags, and oyster or mussel shells bits of broken pots or bunches of herbs. Wealthy ladies would use goose feathers.

The first loo paper was used in Britain in 1857. It was sold in chemists from under the counter because people were embarrassed to see it on display.

Toilet rolls were not sold until 1928 and coloured paper wasn’t introduced until 1957.