London has a proud history of baking biscuits. The rather ill-advised Old Weevil Bakery in Deptford made the famous hard tack biscuit popular with naval authorities as it would last indefinitely.

In the Voyager’s Gallery of the National Maritime Museum they have one example with the inscription ‘This biscuit was given – Miss Blacket at Berwick on Tuesday 13 April 1784’.

[H]ardtack proved unpopular with World War I soldiers, so much they took to affixing a stamp and posting them home. The British Postal Museum has an example and the Imperial War Museum has a Christmas card made from a hardtack biscuit.

If you should wish to bake yourself this biscuit which, it must be said, was detested by the armed forces:

Mix flour and water until you have a thick, gluey batter. Roll flat, cut out discs and prick a pattern on to the surface of each with a pin. Cook and cool five times until rock-hard and moistureless.

Now forgotten, the Pearl was once London’s most famous biscuit, it was Introduced in 1865 by Peek Freans in Bermondsey. Unlike the hardtack, it was the first recorded crumbly biscuit. You can buy a ‘Pearl’ from Fortnum and Mason, albeit chocolate covered. 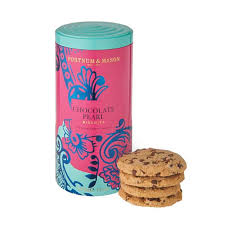 To revive the Pearl which was similar to a modern Rich Tea biscuit:

Stir up white flour, sugar, butter, milk and salt. Spread the dough pancake thin (it will expand), cut out discs and don’t prick any holes on them. Cook for ten minutes.

Another recipe from Bermondsey’s Peek Freans factory was the Garibaldi in homage to the Italian who unified Italy. I suppose to placate some of the deposed nobility they also created the bourbon. Both of which are available today, which is much easier than following one of my recipes.