Standing like a proud relic from London’s industrial past Battersea Power Station has mirrored the capital’s industrial decline.

[I]t has slowly been dismantled and left to the elements by successive failed entrepreneurs while we watched the old lady fade into obscurity. Now a new book by Peter Watts Up in Smoke: The failed dreams of Battersea Power Station has just been published by first time publishers Paradise Road.

Prior to the advent of World War II Battersea Power Station was regarded as one of three key institutions necessary for the running of the capital, alongside the Bank of England and Broadcasting House. Since its closure on the evening of 25th January 1983 at 6.21 proposals to transform this much loved landmark have been at times farcical: an English Disneyland, a casino, football stadium, giant cinema, home to a circus troupe, horse-racing track and even a religious theme park. 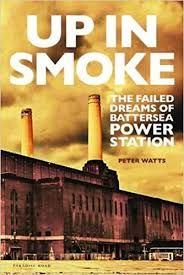 Now its destiny as Peter Watts writes – with his name who better to chronicle the fortunes of an electrical powerhouse – the site could end up as a gated community for the super-rich.

In his book Watts gives us some fascinating facts about the monolith sleeping on the Thames’ south foreshore.

The chimneys, its most notable feature, were cast by the inventors of the football net. When constructed its control room was literally a cathedral of power with the walls lined with Napoleon marble with switchgear in matching colour and its operatives wore felt overshoes to protect the teak blocked flooring.

So necessary to London’s power was Battersea, that when a turbine fire necessitated the station’s shut down the launch of BBC2 was postponed until the following day.

Anecdotes fill this enjoyable book. I particularly liked the rumour that Michael Hesteltine gave Battersea heritage listing to annoy Thatcher, said to loath the building. Or Eddie The Eagle (now the subject of a movie) received £2,000 to mention the new ride at Alton Towers which at that time was owned by the developer of Battersea Power Station who wanted to build a similar theme park on the site.

It’s almost as if the old majestic building was defying any transformation into a commercial venture bankrupting a succession of developers. Work was even delayed in 2001 when the only breeding pair of peregrine falcons were discovered nesting in one of the chimneys.

Now it looks as if the site will become another ubiquitous riverside development, all be it with four chimneys poking out over the steel and glass ’executive’ properties and as Watts points out a one-bed studio flat sold off-plan in 2014 for £1.5 million was the same price the entire building and surrounding land was offered in 1984.

Rather than a dry chronological history this is a hugely readable and well researched book from Peter Watts and publishers Paradise Road whose aim is to produce future books about London.

This is not a sponsored post. The publication reviewed has been purchased independently by CabbieBlog who has not received payment for writing this review. The opinions expressed are solely his own. Links here conform with guidelines set out in Write a Post.