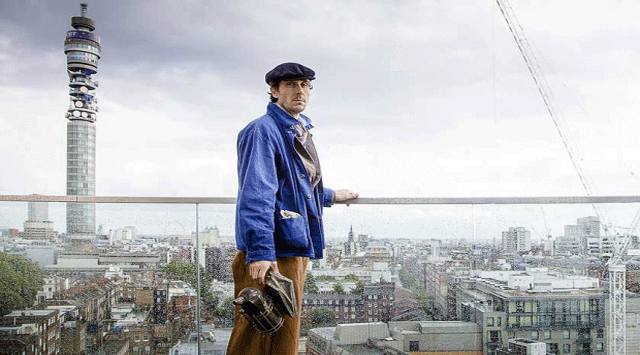 Have you noticed there are more bees in London? Me neither, apart from 10,000 that swarmed on a pyracantha bush at the bottom of my garden last May [see picture below].

Now I realise that we should see more bees after reading Steve Benbow’s The Urban Beekeeper, for its author is on a mission with all the zeal of an evangelist to turn the capital into an apiarist’s paradise, bringing local honey to its residents.

[H]is paternal grandparents tended bees on their smallholding in Shropshire giving Steve a taste for honey and working with the little critters. He spent years learning his craft from the master beekeepers and rural locations but felt that London could benefit from their introduction.

Years of intensive farming had denuded the supply of nectar and pollen, and more importantly reduced the diversity of plants attracting the bees. Steve had aspirations to bring bees into London. After talking to other beekeepers from Paris, Rio and New York he moved to Bermondsey 17 years ago and set up hives behind the lift shaft on the roof of his flat.

The sky was the limit, well at least some of London’s tallest buildings. He persuaded Fortnum & Mason’s to give up roof space for the bee hives, painted in Fortnum’s trade mark duck-egg blue. For the famous grocer it seemed as if they had turned full circle.

In 1707 Hugh Mason had a small shop in St. James’s Market and a spare room in his house, which was taken by William Fortnum, a footman in Queen Anne’s household. The Royal Family’s insistence on having new candles every night left the budding entrepreneur enough wax for a sideline that gave him enough money to start what was to become the famous Piccadilly store.

Now Steve maintains hives on some of London’s greatest landmarks, Tate Modern, Tate Britain, the National Portrait Gallery selling local honey. Apparently London’s plant diversity makes for really good honey that varies enormously from borough to borough and Steve hopes to eventually have hives in all of London’s 32 boroughs; Dark and aromatic from Bermondsey, citrusy Westminster or the slightly bitter tones of Harrow.

The only problem with the apiarist’s success is the gruelling work load. Reading his book you realise that there is a lot more to beekeeping than jus extracting honey. To maintain hives across the capital involves heaving lifting, often at great heights, working nights, apparently it’s the best time to transport them and tending his bees throughout the year.

The chapters of his book are sub-divided into the calendar year giving an insight into his often nomadic life and the work that goes into giving us the true amber nectar.

Do Not Pass Go: From the Old Kent Road to Mayfair by Tim Moore The stirring travelogue of one man's erratic progress around those 28 London streets, stations and utilities, Do Not Pass Go is also an epic and lovingly researched history of London's wayward progress in the 78 years since the launch of the world's most popular board game.