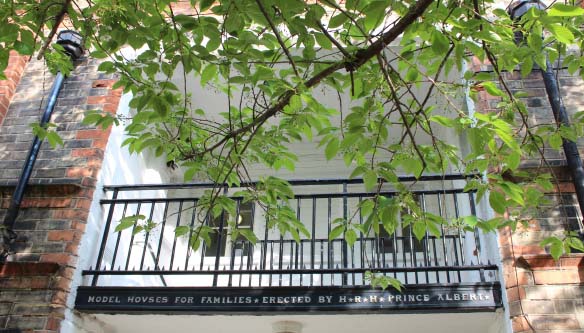 Every month CabbieBlog hopes to show you a little gem of a building which you might have passed without noticing. For this month’s building I’m indebted to David Long’s Spectacular Vernacular. The Kennington Park Cottages (as they are now known) are barely noticed by most of us as we travel along the A3, standing as they do on Kennington Park Road at the Kennington Road junction.

[N]ow the headquarters of the charity Trees for Cities which featured on a previous post, this building is one of the few reminders of the 1851 Great Exhibition we can now see in London, reminiscent of the show homes now built each year for the Ideal Homes Exhibition originally stood in Hyde Park alongside Joseph Paxton’s Crystal Palace.

Erected by the Society for Improving the Condition of the Labouring Classes, a worthy if patronising charity, whose president was the Prince Consort the cottages represented the vision of model housing in their day. An inscription beneath the wrought iron balcony attestify to this declaring: ‘Model houses for families erected by HRH Prince Albert’.

The building contained four dwellings, two on each floor, each having a living room, three bedrooms, a lavatory (a groundbreaking concept then), a scullery fitted with a sink, coal bin, plate rack, dust shaft (this presumably was a Victorian dustbin) and a meat safe. An airing cupboard was to be found in the living room heated with air from the fireplace.

Hollow bricks were used in the construction, an early energy saving device as they were dry, warm, long-lasting, and fire-proof – and cheap! It was claimed that the internal face of the walls was so smooth that plastering was unnecessary. The design was later replicated in Cowley Gardens, Stepney and Fenelon Place, Kensington.

The £458 14s. 7d. spent on building these exhibition homes was not to be wasted and in 1852, after the Great Exhibition closed, it was re-constructed at Kennington Park, an appropriate location as with the exception of the four Royal parks the former common land was for a long time literally the only large open space available to the ‘urban poor’. It was also the very spot the Chartists had gathered to build a radical political party dedicated to representing the interests of those same labouring classes.

The poor were however reminded of their place in this magnanimous gesture of providing them habitable accommodation as the cottages, along with housing two park superintendants, had a museum dedicated to the cottage economy.