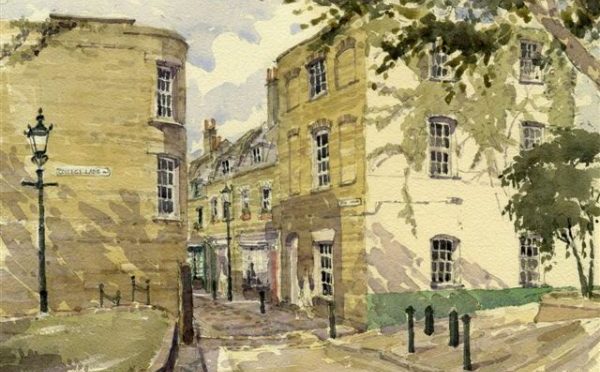 Heritage and history, you can’t get away from it nowadays: Restoration Home, Downton Abbey, Antique Roadshow; touch your remote and up pops another programme reminding us of our past and the need to preserve it. On a blog that’s devoted to the world’s most historically diverse city I’m reluctantly finding myself after 4 years returning again to a little gem of a street in North London – Little Green Street.

[T]his is one of only a handful of modest Georgian streets left preserved much as they were 250 years ago. As modern London’s population rises exponentially what building land – wherever its location – remaining has risen in value, and that has driven (driven being the relevant word for Little Green Street), developers to use land unsuitable in a more sane city.

The building plot in question is a restricted backwater called College Lane which used to be home to a British Rail Staff clubhouse, long since closed, now just ripe for development.

They plan to build “20 mews houses arranged in terraces of 2 and 3 storeys and a block of 10 flats comprising studio, 2, 3 and 4 bedroom flats” with “provision of underground car parking”. Now that seems like a pretty big building project to me involving thousands of lorry loads as the excavation progresses and yet more deliveries of building materials.

This would be a complex operation in any circumstances, but for the developers the only access to the site is up Little Green Street as quaint narrow cobbled street barely 2.5 metres wide. In fact the logistical task seems so insurmountable I’m surprised that Kevin McCloud isn’t making a Grand Designs programme for Channel 4 about the insanity of the build.

Most of us have come to associate Georgian architecture with the great or exceptional houses that are shown in television adaptations or by visits to a National Trust house, but for the majority of people they lived in humbler dwellings. Second rate houses were built by merchants were no more than 500-900 sq ft in size. These houses, small by modern standards, would have been termed large by the Georgians. The most important rooms would have been given the largest windows. On Little Green Street, eight of the homes are bow-fronted and were originally shops, selling goods such as ribbons, coffee and mousetraps.

Having survived the Victorians zeal for redevelopment and the Blitz, in 1966 The Kinks used the street as a backdrop for their 1966 song appropriately named given the circumstances Dead End Street which became one of the first true music videos.

If a great crested newt or natterjack toad had been found nearby the site would have been given SSSI status and the developers prevented from commencing work. But Little Green Street only has as its defenders people wishing to preserve a small cul-de-sac which inevitably has led to accusations of nimbyism.

This week the developers plan to dig up this historic street and its setts (cobbles) will be lifted a fortnight later to stop the construction vehicles sinking into a road, that used to see little more than horse-drawn brewery drays, as hundreds of trucks drive along here over the next four years.

Take a last walk along the cutest Georgian Terrace in London while you can. After the weekend of the 3rd and 4th August, you will need permission of a ‘banksman’ to enter the road.

Little Green Street looks like a perfect slice of Regency London, John Betjeman has written about it in his poetry and Frommer’s Guide has nominated it as one of the ‘11 Places to See Before They Disappear’, I fear their advice – now a little late – might proved to be prophetic.