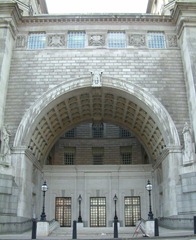 I think I must be getting like my mother, she would only watch a television programme if she could recognise the locations. I now find myself watching Spooks on the BBC trying to guess where it was in London that particular scene was shot.

My mother once told me she worked at Thames House during the war as a secretary – she certainly didn’t look like a Mata Hari – and would, as a consequence of the bombing, have to struggle home on a disrupted tube network every night back to north London – a bit like today.

Anyway while watching Spooks they kept showing a front door with the caption Thames House SW1, now I’m pretty certain that the building featured is the headquarters for various news organisations, and not our ultra secret service. I might be wrong, we didn’t learn on the Knowledge where it was, they were hardly likely to ask us the location of Smiley’s organisation.

[S]o on impulse I googled MI5 and they have their own website which shows potential suicide bombers the front door should they choose to pay MI5 a visit. Not only that, to my surprise they have a recruitment section giving details of their requirements for a variety of jobs within the service.

They are recruiting what they euphemistically describe as “Mobile Surveillance Officers” that’s spies to you and me. Now I’m old enough to remember the Burgess/Phil by/Maclean debacle and rather assumed recruitment was through an old boys’ network with links to an Oxbridge College, and a prelicton to, shall we say? – unusual sexual appetites.

There is great deal on the MI5 site about extended working hours, multitasking, thinking on your feet and the need not to have facial tattoos (they make you too noticeable, apparently!), but nothing about getting shot at, being stabbed with trick umbrellas or being irradiated. Should MI5 not be your cup of tea (or vodka martini), there are links to the sites of MI6 and GCHQ, so surely there is something in there for everyone?

I’m not surprised that they are recruiting if [Spooks] – why is the title always in brackets? – is anything to go by. Only six people seem to work out of Thames House and have to do everything: surveillance; computer checks and tracking; chasing around London in a top of the range car (another chance for me to spot the landmark); and be the only person who tails a suspect and finally eliminates him. I’m surprised the series isn’t sponsored by our security services and it all looks such great fun that I’m thinking of applying myself.

Oh dear! I think I’ve just blown my chance to have an alternative, if potentially short, new career from being a cabbie. The small print reads: “Owing to the sensitivity of our work, we do not publicly disclose the identities of our staff. Discretion is vital. You should not discuss your application, other than with your partner or a close family member”

The whole world now know that I’m considering applying . . . but at least the super sleuth in me can track down MI5’s front door.

Some of this information was based upon an original post by Malcolm Edwards at London Ramblings.

2 thoughts on “Spooked on Millbank”