[U]nfortunately CabbieBlog’s first cabinet has now been filled with all manner of interesting London trivia. So as to show off my collection to visitors another one has been obtained and here CabbieBlog gives you a further London Cabinet of Curiosities:

Village Underground
Situated on a roof in Shoreditch High Street, Village Underground is the brainchild of the splendidly named furniture designer Auro Foxcraft, who claiming he couldn’t afford a studio decided to build his own. To do this he spent £25,000 obtaining four redundant Jubilee Underground Line carriages, craned them onto the roof of a Victorian warehouse – quite a task: they weigh around 26 tonnes each – and fashioning out of them a series of offices for writers, photographers and other arty types. 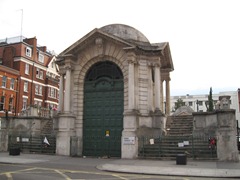 The Elephant House
On the western side of Duke Street in Brown Hart Gardens, this peculiar structure is referred to as the Elephant House; its title suggests a place where huge mammals once resided. The story is that Queen Victoria kept her elephants here; apparently Victoria acquired the elephants when she was appointed Empress of India, having received a herd of elephants as a gift from loyal Maharaja’s. These unfortunate animals were then shipped back to London and the Elephant House was built to provide the animals with some kind of comfortable habitat. The design has huge gates where an elephant could access entry and exit, and has entrance doors that have an eastern looking appearance. Unfortunately there is no evidence as to the authenticity of this story and it would appear that the Victorian architects who designed this unusual structure, were overindulging their creative minds.

Unfortunately this building has a more prosaic history; it was developed as an electricity substation in the late 1800s and so remains to this present day, generating electricity to the local Mayfair area.

Before being redesigned in 1903, the site had a communal garden with trees, benches and a fountain but had become a hangout for ‘undesirables’. The new structure therefore continued to provide residents with a communal garden while accommodating transformers below. But one other curious fact remains why is the ‘garden’ the only place in London where quarrelling is specifically forbidden by law?

The mole that killed a king
This statute of William III is only there because the well-heeled residents of St James’s Square got fed up with the centre of their square used as a rubbish tip for kitchen rubbish, dead cats and scraps of timber. They wanted something in the middle to give the square purpose, rather than as a refuse dump and William of Orange seemed to good idea at the time. William’s statue was not initially popular so despite the resident’s enormous wealth, they refused to pay for it, than a merchant, Samuel Travers, bequeathed in his will funds for its completion. But the family contested the will and for the next 70 years the statute remained just on paper.

Eventually in 1806 the statute was finally completed, but there is something strange about it. A small molehill lies at the feet of Sorrel, the King’s horse. What is the molehill for? The answer is that William is said to have died of pneumonia, a complication from a broken collarbone, resulting from a fall off his horse. Because his horse had stumbled into a mole’s burrow.

William was the Protestant King brought to England from Holland to replace the last Catholic. King James. James’s supporters and all Jacobites then and now still toast ‘the little gentleman in the black velvet waistcoat’. The mole that killed a king.

Secret policeman’s hook
This hook on the wall near the junction of Great Newport Street and Upper St. Martin’s Lane in Covent Garden is reputed to have been here since the 1870s. Probably used for holding a policeman’s cape while he directs traffic or possibly to let the garment dry after rain. As this junction nowadays is only congested with pedestrians was it a Victorian traffic hotspot? It’s a popular yarn, whether it’s true, who knows? All Cabbies on The Knowledge are expected to find it.