You know that sinking feeling. You’re at a party and the village bore sidles up and wants to discuss his collection of beer mats.

What do you do? Enter into an earnest conversation on the merits of square versus round or oblong, praise the durability to withstand liquid, and discuss their post-modernist designs.

As I see it your have three options:

[S]tuck inside your cab you regularly have the village bore, with the maxim ‘the customer’s always right, even if he is a complete prat’ ringing in your ears you have that same dilemma. Well a recent study might have the answer to my problem.

Social researchers have studied the interaction between hairdressers, dentists or cabbies with their clients. They call this ‘The rules of conversational engagements for everyday encounters’, and interestingly it would appear that we have the upper hand in driving the conversation, even though you are employing us.

It would appear that the driver starts the conversation choosing the subject, and, sorry about this, drives the conversation forward. You, of course, reply to my discourse not wishing to be confrontational, as you regard conversation with a stranger to be on a different level than, say somebody you met in the pub or a casual acquaintance.

So the next time you are in the back, take this little bit of advice, and know your place.

Thank you for letting me shout at you. 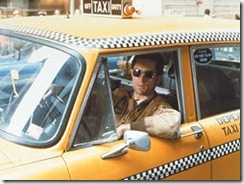 So said Travis Bickle in Taxi Driver brilliantly played by Robert De Niro (arguably the greatest movie actor of his generation). But maybe we should look at another genre of film.

Have you nothing to do on a wet Sunday afternoon?

[M]ay I commend to you any Fred Astaire’s 1930 black and white movie? There on screen men are actually treating people with civility. Opening doors for women, allowing ladies to sit-down first and rising when a lady comes into the room. And wait for it – saying please and thank you.

As a sometime working cabbie I’m amazed at the number of people who can’t even stop talking on their mobile phone to give me their destination. They will then hold out their hand without even looking at you for their change, usually while still talking crap into their mobiles.

While on the roads the habitual use of the car horn makes London sound like downtown Cairo, and if you don’t pull away from the lights at amber some idiot behind will remind you that you are impeding his progress.

While some drivers think it is a badge of courage to block my cab from proceeding through a road junction when they are stuck in traffic at an intersection.

When you go to that temple of consumerism, Lakeside, have you noticed families, dressed in the regulation strip of their football team, will walk four abreast forcing you to move out of the way of their fat arses?

It gets no better in garages, while waiting in a queue, some idiot who cannot wait in line with the rest of you, will walk to the front and drop his (and it’s always his) money on the counter very un-English.

If I have the temerity to take a route in my cab not to my passengers’ liking I will get a rude rant of how I am “trying to rip them off by going the long way round”.

This is the dictionary’s definition of rudeness (also called impudence or effrontery):

The disrespect and failure to behave within the context of a society or a group of people’s social laws or etiquette. These laws have already unspokenly been established as the essential boundaries of normally accepted behaviour. To be unable or unwilling to align one’s behaviour with these laws known to the general population of what is socially acceptable would be considered being rude.

Well this cabbie is trying to raise the bar for politeness, when asked rudely by someone:

“Do you know where Trafalgar Square is?”

I will reply in my most mannered way

“Yes I do, thank you very much” and drive off.