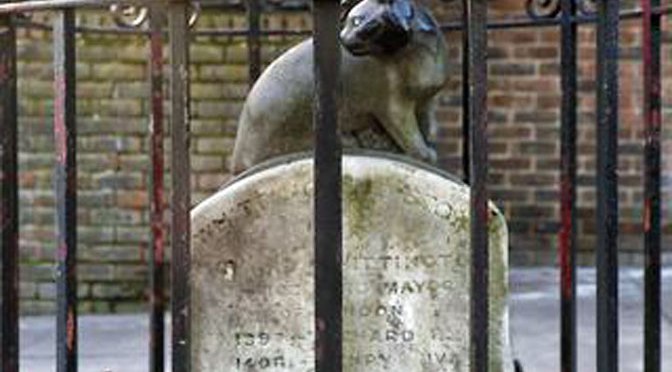 Normally at this time of year children would have been taken to the Panto, giving them an introduction to cross-dressing, crass jokes and mild peril. One of the established characters in this uniquely British tradition is Dick Whittington.

In the year that Dick will not be appearing on stage, also marks the bi-centenary of the Dick Whittington Stone, which has sitting upon it a black cat.

Traditionally Knowledge boys and girls touch the cat’s head to bring them luck at their next Appearance. Much like the tests to become London cabbies, the history of this monument is shrouded in mystery.

Everyone knows the story of Richard Whittington who having failed to make his fortune started to leave London and climbing up Highgate Hill heard the bells of St. Mary-le-Bow in Cheapside some 4 1/2 miles away (he must have had some pretty acute hearing) and took the peal to be giving him a message to return to the City.

He returned with his cat and the popular pantomime character was born.

The reality of this iconic site is more complicated but closer to actual events. The 1821 stone we see today was not the original. An engraving in Beauties of England published in 1776 reported that ‘the stone is a small pyramid mounted upon a larger pediment’, and was thought to have marked the spot of a leper hospital that stood opposite.

This stone was reported to have been sawn in half and placed on each side of Queen’s Head Lane, Lower Street, Islington (I understand that Lower Street was renamed Essex Road).

The current stone, inaugurated in 1821, is in two segments and was restored in 1935, even so, its inscription telling of medieval merchant and City dignitary Sir Richard Whittington is almost illegible:

The cat surmounting the stone arrived later, in May 1964, when Dennis Biddett unveiled the cat upon the stone. The cat was carved by Jonathan Kenworthy, in polished black Kellymount limestone, looking back at London.

This and the iron railings are the only pieces we can date with some certainty, the story of the stone(s) is far more convoluted than I’ve described and can be read at IanVisits.