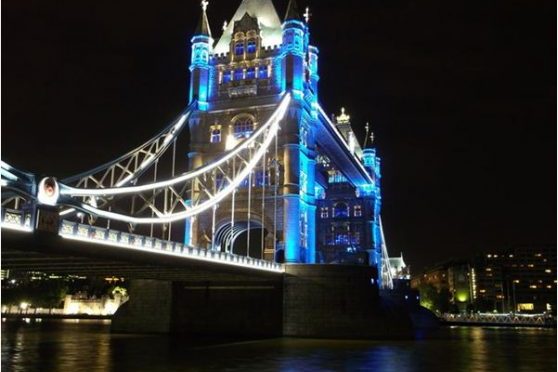 I have been driving down the Embankment watching as the soft incandescent lights strung between lampposts slowly died of age, and no one bothered to replace them. Then the wet desolated pavement alongside the Thames was reminiscent of a late ’50s scene for a cigarette advert as lone man, stopping under a light, its gentle glow illuminating him as he lit up, to the familiar catchphrase ‘You’re never alone with a Strand’. 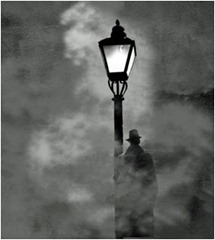 As the last of the old bulbs have spluttered and died a brave new lit world has replaced them – with that stark intense blue of the halogen bulb – and the string of lights between lampposts isn’t the only harsh light now to be found alongside the Thames.

Green was once the de facto colour of environmentalism when political parties adopted it into their name or their logo, but now blue has the right credentials. Green is about trees and plants whereas blue is about oceans, rivers, lakes and the sky, ensuring adequate clean supplies of essential resources — air and water, it is also the colour of our planet seen from space.

[O]ne of the world’s biggest polluters – carmakers are now using blue as a colour and a word to express cleanness and efficiency – even for vehicles with petrol and diesel engines. Volkswagen puts a ‘Blue Motion’ badge on its most efficient cars; Mercedes-Benz adds a ‘Blue efficiency’ emblem to its environmentally friendly (and easiest to recycle) models. New Holland, part of Italy’s Fiat group, even uses the name ‘eco Blue’ on its low-emissions range of blue tractors.

For sure, blue is more acceptable to right-of-centre political interests than the term green since that colour was appropriated by the left-of-centre parties in Europe. So the ‘boys’ of City Hall have embraced those beautiful eco-blue lights. “You see”, they would say “lighting up the Thames hasn’t harmed a single polar bear using our blue energy efficient bulbs”.

It started with the long-overdue construction of the Hungerford footbridge with its blue lights surmounting the pillars, once before Coco-Cola took over, the London Eye adopted it and now almost every bridge spanning the Thames is bathed in a blue glow. My cabbie colleague in his the capital letters blog has dubbed the new Blackfriars Station, which spans the Thames and is illuminated with the ubiquitous blue lights as – Bluefriars.