We all have namesakes. Presumably, somewhere. People sometimes ask me if I am related to a former Middlesex cricketer who shares my name. But another Hugh Pearman – there aren’t so many of us – interests me. He wrote a slim paperback, Curious London in 1951. It was subtitled “An illustrated guide to the curious places and curious things in the twenty-nine boroughs and cities that make up the county of London”.

[T]HIS HUGH PEARMAN was a London taxi-driver with a wife who hailed from Lincolnshire. We know this from his short introduction, where he thanks her but does not name her. If there are children, they are not mentioned. He states that the book stems from his accumulated knowledge over the years as a cabbie. “It deals not with the London that most tourists visit but with, as its name implies, the unusual, the quaint and the curious.”

He was doing what I do a lot of the time: wandering around, taking photos of things which seemed interesting, writing about them. His little book must have attracted some interest: my copy, found via an online second-hand bookshop, is a reprint issued a month after the first. Someone called P.W Capewell bought the copy I now own, signed it and dated it in September 1951.

This is a very economical book, in various ways. In those days of the London County Council (much smaller than today’s Greater London) the 29 boroughs and cities were:

Hugh devotes a terse section to each of these, starting each with a quote that has something to do with the place. Often lines of doggerel, these can be very random. For Bethnal Green he quotes A.A Milne: ‘I saw little rabbits ‘most everywhere’ for no other reason than that there were rabbits in the children’s zoo in Victoria Park. He gives us a photo of the rabbits.

Each of the 29 sections is a double-page spread with six monochrome photos on the right-hand side, and six numbered captions on the left. Hugh never varies this: Westminster gets no more space than Woolwich, though he does at least start off with the City and Westminster before he slips into alphabetical order for all the rest. There is an admirable cussed rigour to this. One imagines he was very aware of the printing costs. The thin uncoated card cover has a dash of spot red on it, otherwise, it’s black and white all the way. The cover, however, looks designed, is graphically almost elegant. Almost: the hand of the jobbing printer is revealed in the curious image handling, a photo given a woodcut treatment and squashed into a splodge in the top right-hand corner. 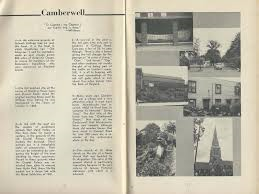 The photos are of the point-and-shoot variety. I imagine the Kodak Box Brownie in his glovebox, or perhaps one of the slightly more superior collapsible pocket bellows cameras. It’s likely he did not have the photos enlarged but used the negative-sized prints that were the customary offering of the film processors, given the large format of roll film of the time. Reproduction is very poor, but you can make out just enough. He could have done some of this between fares, but the project must have taken up his weekends: one very posed photo of a woman beside a little car (Hillman? Standard?) at what was then the only surviving tollgate in London (College Road, Camberwell, fee threepence) suggests to me that this is his non-work car and that this is Mrs Pearman. Her back is to the camera, but she is standing on the driver’s side. A coat with legs, her head lost in the trees, an image so small it cannot be enlarged without breaking up, she could be any age. Suddenly Hugh seems like a kind of local Pevsner, happy not to be at the wheel, being driven around by his wife, peering at oddities. 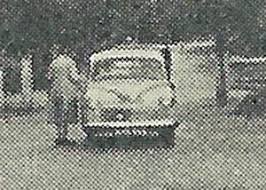 How old was Hugh when he did this? He does not say, but he’s clearly been a cabbie for a long time. Perhaps he was my age, late 50s. My wife, who in the tradition of Old Hugh I shall not name, is from the other side of the Humber: East Yorkshire rather than Lincolnshire. Still, we are both Southerners with northern spouses, that’s a bond. Of course, I do not know what he looked like. In my mind, he’s like that fine character actor Phil Davis, who lives across the street from me in Crouch End, who passes unnoticed in a crowd, and who has played a convincing (if evil) London cabbie before now, in Sherlock.

In 1951 the recent war still loomed large. Bombsites were everywhere in London. Little reconstruction had taken place. Postwar austerity meant that rationing was worse than it had been at any time during the war. 1951 was the year of the Festival of Britain – on the South Bank, in Battersea and in the rebuilt show estate of Lansbury in Poplar. It was billed as the “Tonic to the Nation” and was a hot topic from the late 1940s onwards. I would love to know Hugh’s views on all this. Had he served in the war? If he was too old for that, did he see the destruction of the Blitz? Did he try to ply his trade during it?

All he vouchsafes is the aftermath. The first photo in the book is of a blitzed City church, Holy Trinity in the Minories. As Hugh predicted (“the bells of this bomb-ruined City church will be forever silent”), it was never rebuilt. The second is of an official Corporation of London wooden sign recording where the first bomb of the war fell (Fore Street, 12.15 a.m, 25th August 1940), the third of a fragment of Roman city wall amid the devastation of St. Giles: the site of what was later to become the exemplary Barbican development. In the fourth, Hugh draws a comparison with the earlier disaster of the Great Fire, showing us the gilded-boy memorial on Cock Lane. “Many are the calamities from which London has risen Phoenix-like,” he remarks, never passing up the opportunity for a cliché.

That’s pretty much it for the war: thereafter he mostly avoids its traces, though his eye is caught by a grand staircase left suspended in the air in one blitzed Mayfair house, and by two adjacent prefab homes in Woolwich – one the product of the First World War, one the second. The only reference to the Festival of Britain comes when he shows us the fragment of an old music hall on Upper Marsh, Lambeth (“a thoroughfare almost in the shadow of the 1951 Exhibition”). No shots of the Dome of Discovery being erected. No mention of his own history. 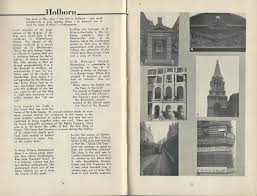 There are places he singles out that still exist today, such as the Victorian umbrella shop in Holborn, or Battersea Power Station (“Wellsian…At night, when it is floodlit, it has an unearthly sort of beauty”). And there are places that do not, such as Mr Tomaso’s barrel organ works, the last of its kind, in Rocliffe Street, Islington; or the Gothic wonder of Angela Burdett-Coutts Columbia Market in Bethnal Green, soon to be demolished (“this monumental failure has the air of a shabby, unhappy ghost”). We see a tram emerging from the tunnel on Kingsway. We see the masts of sailing ships in the Thames. We see the Jacobean water-supply canal called the New River, long since truncated, still carrying a trickle of water down to New River Head in Islington. We see a blacksmith shoeing horses in Fulham. A horse-drawn barge on the Regent’s Canal (London appears to have had lots of horses in 1951, brewers’ drayhorses among them). An escapologist act drawing the crowds in St. Martin’s Lane. East end kids being given farthing toys in Fern Street, Poplar. And a lot of overgrown graveyards, flights of steps, alleys, pub signs, survivals such as sets of stocks and old wells, each in some way significant to Hugh.

He even shows us the place where the Brighton Road used to end in Paddington, which makes for a very dull photo worthy of Martin Parr. “Where Craven Hill Road makes a “T” junction with Porchester Terrace, there, unknown to most motorists, is the ending of the Brighton Road. If a traveller from Brighton to London did not deviate from his course (the one-way streets of today make this impossible) he would traverse London, and eventually come to this junction, where, if he wished to continue his journey, he would be forced for the first time to turn to the left or right.” Such detail, but so what? What’s the significance of the Brighton Road for Hugh? Why that road rather than any other? There was a cluster of Pearmans in Brighton, my Dad came from near there. One can conjecture that Old Hugh did too. Had he been a born-and-bred Londoner he would surely have talked of the start of the Brighton Road, or not mentioned it at all. It was no landmark, that’s for sure.

There is the odd place that Hugh thought was a goner, but which survived against the odds. He shows us the boarded-up shop-front of Pollock’s original toy theatre emporium, on Hoxton Street in Shoreditch. It had been bomb-damaged. “Alas, its doors are now probably closed forever.” Not so: Pollock’s was revived, moved, revived and moved again, and now exists as Pollock’s Toy Museum and shop in Fitzrovia.

Now, OF COURSE, it has crossed my mind to retrace Hugh’s steps, take my own photos, issue a new self-published or online edition of “Curious London” that will have future librarians and archivists scratching their heads over the apparent extreme longevity of this chronicler of London’s nooks and corners. I may not have a taxicab, but I do have an Oystercard and a Citroen C3 Picasso. However, I’m not going to do that. The enticing idea is better than the time-consuming, massively unprofitable reality. Especially as he is more than a little vague about some of the exact locations.

So this post is, I should imagine, the beginning and end of “Curious London Revisited”. I already know too much about what’s happened to many of these places. I’m not sure that I really want to find out the fate of the rest. Besides, I want this other Hugh Pearman, this amateur-historian cabbie with the camera, this proto-psychogeographer, tootling around town in the ration-book years of postwar austerity, to remain tersely enigmatic. I feel I shouldn’t muscle in on his territory.

The author has given permission for this Guest Post to be reproduced on CabbieBlog. Other articles can be found on Hugh Pearman’s website. All links here conform with guidelines set out in Write a Post.