Walking down Whitehall away from Trafalgar Square, after for about 70 yards along the east side is Craig’s Court opposite the Whitehall Theatre. If you chance across Craig’s Court, there is a tenuous link to CabbieBlog’s previous post – tart cards – down this little alleyway you will come across the façade of Harrington House, now a secret telephone exchange, but once a mansion bearing the name of its builder, the Earl who built it.

[W]hen John Stow trundled down the Strand clutching his parchment and quill he stopped at the Eleanor Cross, squinted at the panorama, shook his head, and recalled the good old days, which inspired him to write:

Then was there a hospital of St Marie Rouncivall by Charing Cross (a cell to the priory and convent of Rouncivall in Navar, in Pampelion diocese) . . . Near unto this hospital was a hermitage a chapel of St Katherine, over against Charing Cross.

This hermitage and chapel had been formed about 1255 but in his determination to rid England of Papal authority nothing escaped the searching eye of Henry VIII and it lost out after the Reformation. 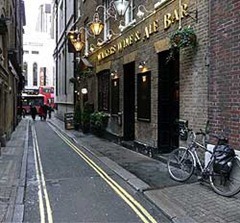 When Whitehall Palace burnt down, Lord Harrington was convinced that the Palace, the centre of power and privilege in the mid 18th Century, would be rebuilt on its original site. Living next to the King meant Harrington could visit the Court every day and seek patronage. Patronage like today meant a title or a job needing little or no work or skills, but an income. Known as Old Corruption it was the way of the world for a corrupt government. Unfortunately for Harrington he was wrong the palace wasn’t built and Parliament was located half-a-mile away from his huge home at the other end of Whitehall.

Until the 1761 London’s streets had no pavements at all, no delineation from that part of the roadway where wheeled vehicles travelled and that part where pedestrians walked, so when a carriage driver wanted, he would simply drive along the street as near to the walls of the houses as he liked. This meant, of course, that going for walk was a hazardous business as London at that time had far fewer wide streets than it does today, (that is why the City has no thoroughfares called road, as a road in early London meant that it was capable of taking two carts side by side, clearly impossible in medieval London), it also meant that in particularly narrow streets, carriages occasionally got stuck – quite literally – between the houses.

Kerbstones and pavements began to appear after the Speaker of the House of Commons, Mr Speaker Onslow, got stuck in Craig’s Court after a visit to Harrington’s House. Parliament had long debated what to do about the narrow, dirty, dangerous streets of London, but they could never reach agreement about who should pay for improvements.

Then one day early in the 1760s Onslow drove in his massive, stately carriage up Whitehall and into Craig’s Court. At the narrowest part of the alleyway where it opens into the courtyard, his carriage got stuck fast between the walls of the houses on either side. If there had been kerbstones and pavements the driver would have been stopped before he got stuck. After fruitless attempts to extricate the carriage, a red-faced and by all accounts extremely angry Mr Speaker Onslow had to be extricated through a hole cut in the roof of the carriage, now wouldn’t you like to see that in today papers?.

In 1748 this Court was the home of Teresa Constantia Phillips. She was a truly scandalous character who had just published a rather spiky version her memoirs. So outrageous were the contents of her publication that the police were provoked into seeing her answer to charges in court. It is said that early one morning no fewer than 13 constables surrounded her house in an effort to bring about an arrest. Mrs Phillips took advantage of the situation and from the bedroom window promoted her book to the officers and assembled spectators. It appears that she managed to resist arrest and later fled the country to take up residence in foreign parts.

Much of the original source material for Down Your Alley has been derived from Ivor Hoole’s GeoCities website. The site is now defunct and it is believed Ivor is no more. Thankfully much of Ivor’s work has been archived by Ian Visits and Phil Gyford.