Every month CabbieBlog hopes to show you a little gem of a building which you might have passed without noticing.

Victoria Gate Lodge is a Grade II listed building in the north-eastern part of Hyde Park that the thousands who pass by its front door barely give a second glance, hardly surprising for this simple three bedroomed building has none of the ornateness of the other lodges.

[D]ecimus Burton designed a lodge for this site, but the end result was more prosaic. Built to the drawings of William Crane in 1838, it is now occupied by the assistant manager if Hyde Park Gardens.

It is the garden behind the lodge that makes this little building so special – a pet cemetery dating from the late 19th century with hundreds of miniature, mildewed gravestones bearing the patina of old age. 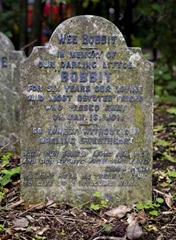 First came ‘Cherry’, a Maltese Terrier. Cherry belonged to the children of Mr. & Mrs. J Lewis Barned, who resided at 10 Cambridge Square. They frequently visited Hyde Park and made good acquaintance with the Gatekeeper at Victoria Lodge who also sold them lollypops and ginger beer. When Cherry died of old age there was much grievance in the family and they decided to approached Mr. Winbridge and his employer to ask if they could lay Cherry to rest in his back garden, which was seemingly appropriate since they had enjoyed such good times together in the Park.

Permission was granted and Cherry was laid to rest in a resplendent ceremony. A tombstone bearing the inscription “Poor Cherry. Died April 28. 1881,” was constructed in his memory.

From this simple act of kindness, this mostly canine necropolis gained popularity when in 1880 George, Duke of Cambridge – who had flouted royal convention by marrying an actress, Louisa Fairbrother – asked that his distraught wife’s favourite dog, Prince, who had been run over, be buried in the garden.

The Duke – who doubled as Chief Ranger of Hyde Park – persuaded the gate-keeper, Mr. Windbridge, to give the poor creature a proper burial in the back garden of his lodge.

By 1915, graves in Mr. Windbridge’s garden were so tightly packed that the cemetery was closed.

Over 300 animals are laid to rest here – dogs, cats, birds, and even a monkey are interned here.

Epitaphs that range from the touching to the maudlin; quotes from the Bible and Shakespearean couplets are sprinkled among personal tributes:

’To the memory of my dear Emma – faithful and sole companion of my otherwise rootless and desolate life’.

’Darling Dolly – my sunbeam, my consolation, my joy’.

’Prince. He asked for so little and gave so much’.

’In memory of our darling little Bobbit. When our lonely lives are over and our spirits from this earth shall roam, we hope he’ll be there waiting to give us a welcome home’.

Some posh dogs even had bespoke coffins. One lady who buried her Pomeranian in a locked casket allegedly wore the keys around her neck until she went to her own grave.

This sad little spot received one last canine resident – also named Prince in 1967, when the Royal Marines were granted special permission to bury their 11-year-old mascot in the southern corner.

Today the cemetery is managed by the Royal Parks, and is only visible through fences. The place George Orwell called “perhaps the most horrible spectacle in Britain” can only be viewed by prior appointment, with a week’s notice.

On her blog London Insight Stephanie Wolff has written an excellent post of her visit to the pet cemetery.
Main picture of Victoria Lodge, Cherry’s story and Bobbit’s grave picture ©Stephanie Wolff Photography.