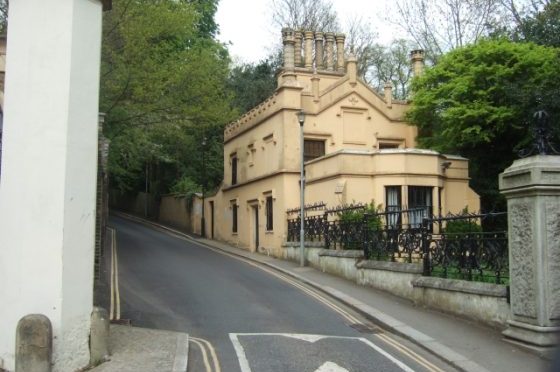 Every month CabbieBlog hopes to show you a little gem of a building which you might have passed without noticing although Waterlow Park Lodge cannot be described as hidden being one of the most prominent buildings in Swain’s Lane.

The lodge still goes unnoticed as Swain’s Lane is just a road to nowhere with few users, it also at night is one of London’s scariest streets.

[S]wain’s Lane was once called Swine’s Lane for obvious reasons leading as it did to the farming land of Highgate and once the route to Smithfield. At night it’s a dark lane with the high boundary walls of Highgate Cemetery on both sides.

This has inevitably led to unsubstantiated tales of sightings of ghosts being seen hovering behind the railings of the cemetery gate; a young girl attacked in the early hours, with the assailant disappearing despite 12ft walls on either side of the road; and the most bizarre recording in 1974 when a dog walker returned to his locked car to find a freshly exhumed corpse with the vehicle – it is not recorded if it was in the driver’s seat.

When on The Knowledge on my little bike at night – at the time unaware of these sightings – I always felt let’s say uncomfortable.

During the hours of daylight it is worth travelling up Swain’s Lane for this lodge to Waterlow Park. The park has within it Lauderdale House said to have once as its resident King Charles II’s Mistress Nell Gwyn. The owner of the house The Duke of Lauderdale who lived here before going to Tunbridge Wells to die in 1682 was by all accounts ‘worm out by debaucheries’.

Now owned by Camden Council, Waterlow Park Lodge a Victorian gem in the Tudoresque Gothic Style has some wonderful chimneys redolent of Hampton Court. A mysterious bust at its side entrance which English Heritage believes to be the Greek God Hercules. Inside the lodge still has the original gun cupboards used by hunting parties on the estate.

The lodge once had a row of cottages opposite – now demolished – in which lived a cow-keeper named John Rolls. His great-grandson would go on to found the famous motor car manufacturers that still carry his name.

The house has been used as temporary accommodation for Camden’s tenants. In 2008 the papers reported that: ‘Single mother moves into Britain’s most expensive council house – an historic £2 million lodge’.

I hope its tenants find the area less spooky than I do.