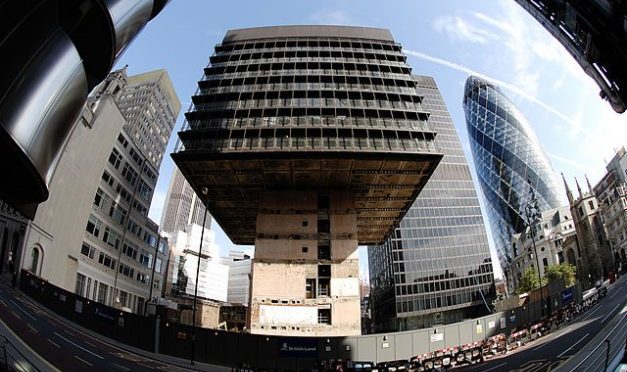 City of London planners have decreed that the view of St. Paul’s – or what is left of it – must be preserved at all costs from the rapid encroachment of high rise buildings that surround it.

Never mind about seeing Wren’s masterpiece from another viewpoint one sacrosanct sightline is looking east down Fleet Street towards the Cathedral
[see below].

[W]hen it was proposed to demolish the previous building at the junction of St. Mary’s Axe and Leadenhall Street its construction caused a few headaches. Due to the building’s unusual design in having its 14 floors suspended on steel ‘chords’ visible on the building’s exterior it was demolished from the bottom up
[see main picture above].

The architects calculated that its replacement would destroy the sightline of St. Paul’s world famous dome. The design called for the new building to be four times higher and the designer rose to the challenge by producing the new famous ‘cheesegrater’ design ensuring that its distinctive shape would become unobtrusive from Fleet Street and would gain popularity for its famous shape.

The same planning regulations have not been applied over the years in the museum area of South Kensington where London’s tallest folly manages to keep a low profile.

Having completed ‘The Knowledge’ I thought that I knew all of London’s largest buildings – that was until I read David Long’s Spectacular Vernacular.

At nearly 300ft. Collcutt’s Tower is higher than the dome of St. Paul’s but the subsequent development surrounding the building has ensured the building’s total anonymity.

Designed by T. E. Collcutt, it was he I discovered who designed the Savoy and the Palace Theatre. When completed Collcutt’s Tower marked Queen Victoria’s 50 years on the throne.

The Renaissance-style tower originally had two siblings each with copper roofs, the towers rising up above the Imperial Institute founded after the grand sounding Colonial Exhibition of 1886. On the anniversary of Victoria’s Golden Jubilee the tower was christened The Queen’s Tower.

The Imperial Institute was completed in 1893 and although regarded as Collcutt’s masterpiece a proper function was never found for its use. Its cavernous great hall was used for examination, and was notorious among students in the 1950s for its leaking ‘temporary’ plywood ceiling and the loose-bowelled sparrows that inhabited it.

In the 1960s the Imperial Institute was demolished despite protests led by the poet laureate John Betjeman. Only the single tower was spared, but as the building originally had propped it up the tower’s foundations had to be considerably strengthened thus allowing it to stand proud on its own.

The only sign that this monument to colonialism exists is when 11 times a year on Royal anniversaries its bells are rung much the surprise of local residents (who must wonder where the sound is coming from) and the sparrows.