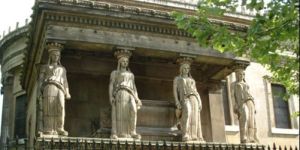 Dumpy Ladies
Now I don’t want to appear unchivalrous, but when you pass St Pancras Church on the Euston Road, tell me don’t the beautiful hand maidens supporting the projecting alcoves, look how can I describe it, dumpy?
The statues were made of Coade’s artificial stone, a formula which has now been lost, and they took three years to make. They were brought to the church looking dainty until they were ready to be put into place,
Mr. Charles Rossi, their builder, found that the measurements were a little out and try as he may he could not get them to fit. With a large crowd bemused at his misfortune Rossi needed to act rather quickly to regain his self respect. He performed a miracle operation with 12 inches being extracted from their midriff.

The Demise of the Chippy
The Fish and Chip supper is a traditional dish of  London, alas this restaurant has now closed.
So it is with regret that Marlon Brando, will not be behind the counter, with “an offer you can’t refuse”.

She’s Got Needled
Having nothing to do with her but called Cleopatra’s Needle, carved in 1475 BC over 1,000 years before London was named, is by far the capital’s oldest man-made attraction. Standing over sixty feet high and weighting 186 tons. Presented to the British in the early 1800s against its wishes. It was loaded onto an iron pontoon and showed its obvious displeasure at being moved from the shores of the Mediterranean by nearly sinking off The Bay of Biscay. The obelisk was saved but six seamen died in the ferocious storm. We eventually erected it in 1887. It is now the most popular suicide spot on this stretch of the Thames, come here at night to witness two ghosts who are seen jumping into the river. You cannot help but feel that the needle is waiting for the day when it can return home to stand proud under the hot Egyptian sun. 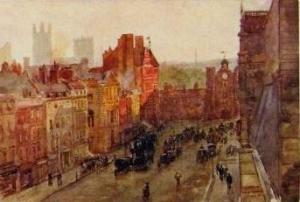 A belated apology on behalf of London’s Cabbies
In 1864 London’s first traffic island was built in St James’s Street. It was funded by one Colonel Pierpoint who was afraid of being knocked down on his way to (and more likely from) his Pall Mall club. When it was finished, the good colonel dashed across the road to admire his creation, tripped and was bowled over by a cab. Sorry about that. — St James’s Street and St James’s Palace, chromolithograph, about 1890 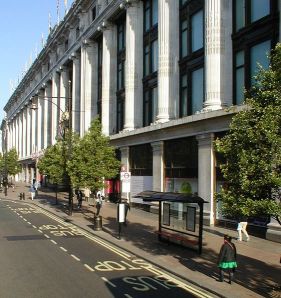 Hello Dolly
Gordon Selfridge the American department store magnet was an interesting fellow who provides a salutary moral lesson for us all. He devoted his productive years to building Selfridges into Europe’s finest shopping emporium. During that time he led a life of stern rectitude, early bedtimes and tireless work. But in 1918 his wife died and the sudden release from marital bounds rather went to his head. He took up with a pair of Hungarian-American cuties known in music-hall circles as the Dolly Sisters, and fell into rakish ways. With a Dolly on each arm he dined out every night, invested foolish sums on racehorses, cars, the casinos and even bought a castle. In ten years he had spent $8 million, lost control of his department store, his racehorses, Rolls Royces and his castle. He ended up living in a small flat in Putney and travelling everywhere by bus. He died penniless and forgotten in 1947, with a smile on his face thinking of the time he had shagged the twin sisters.

Bell ringing corpses
An astonishing obsession gripped Victorian Londoners was the fear of being buried alive. They believed that a doctor would make a mistake when deciding if a person had died, and in cases when death certificates had been issued, the body suddenly groaned or an eye flickered. The thought of waking up in one’s coffin on Wednesday after being interred on Monday filled them with horror. A number of tombs were built with a hollow stone column running down into the buried coffin. At top of the hollow column two or three feet up in the air above the tombstone would be a small bell tower complete with bell. All the “corpse” had to do to bring rescuers racing across the cemetery was pull vigorously on a chain that runs up the hollow column to the bell. Despite all the terror and fears, however, there is no record of anyone buried and then ringing the bell, or at least nobody has heard them.
Credit: http://inrepose.typepad.com/in_repose_blog/2007/09/safety-coffins-.html

The Golden Boy of Pye Corner
The Golden Boy marks the extent of the Great Fire of London in 1666. The fire, which started at The Monument, a mile away, “was ascribed to the sin of gluttony . . . and the boy was made prodigiously fat to enforce the moral.” The statue once had wings. ©Kieran Meeke

Crossbones Graveyard
Some 15,000 bodies were buried here before the 1850s, many of them prostitutes. Known as ‘Winchester Geese’ (as they were only allowed to work in the diocese of the Bishop of Winchester), they could not be buried in consecrated ground. The spot is still dedicated to the ‘Outcast Dead’. ©Kieran Meeke

The Watch House
This watch house was built overlooking the churchyard of St Sepulchre’s in the 17th century. The only legal source of bodies for medical study was those of executed murderers. Grave robbers supplied a need for the nearby St Bart’s – England’s oldest surviving hospital. ©Kieran Meeke

York Watergate
Now 150 metres from the water, this was built in 1626 for the Duke of Buckingham. The gardens of his home, York House, on the Strand backed on to the river here but the building of the Embankment (part of Sir Joseph Bazalgette’s Victorian sewage works) left the gate stranded. ©Kieran Meeke

Many thanks to Kieran Meeke for giving me permission to reproduce some of these items. For more information of unusual facts and trivia, visit his excellent site Secret London.