There cannot be many commoners who have given their name to so many parts of London as Sir Hugh Myddleton (or had their name misspelt as much), and today marks the 400th anniversary of the opening of his venture to bring water into London from Hertfordshire. Londoners only had access to water from wells or from the filthy Thames, via a large waterwheel at London Bridge. A challenge issued by King James that finally brought a solution to the problem.

[H]aving made his fortune in London as the Royal Jeweller to King James I,  Sir Hugh Myddleton proposed to construct a water conduit from Amwell in Hertfordshire into the capital. His scheme was to run the water’s flow along the 100ft contour line but he met with vociferous opposition to the scheme as it ran its sinuous path across farmers’ fields on its route to London. 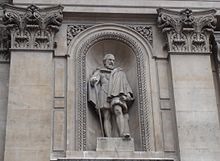 Some evidence of his venture can still be seen, in Enfield Town, a little park has the New River running through it before going underground. Popping up again at Bush Hill Park as it wends its way through Palmers Green disappearing underground again when it reaches Myddleton Road at Bowes Park. It next appears alongside the two reservoirs constructed for this venture by the Amhurst Park and Seven Sisters Road junction before going underground at – yes, you’ve guessed it – Myddleton Avenue, with a final above ground appearance in Cannonbury at New River Walk.

The original venture comprising of over 38 miles terminated at New River Head was opened on 29th September 1613 when water was let into the Round Pond at New River Head at the site of the Thames Water Board’s headquarters (now converted into flats) at the corner of Rosebery Avenue and Hardwick Street.

Water was then taken from the reservoir into the city in pipes made from hollowed elm logs and then into individual houses through lead pipes. By 1670, up to two-thirds of houses in many parts of London had running water thanks to the New River.

The cost of the scheme proved beyond the means of Myddleton’s private fortune and he approached the King for help. As he was the Crown jeweller the King agreed to pay half the cost of the whole undertaking for half the profit as a sleeping partner. It proved a good investment by 1700 a single share paid about £200 a year but and by 1766 it was worth £8,000 a year.

The New River Company remained London’s most important water supplier for 300 years and the venture is commemorated in many ways around the Islington area of north London.

Sir Hugh Myddleton’s house at Myddleton Corner was at 140-3 Upper Street, built in 1595 the building was rebuilt in 1891 and a terracotta plaque on the first floor attests to this. Myddleton Hall is to be found in Almeida Street and now used as the Almeida Theatre.

Islington’s finest square is Myddelton Square just south of the Angel, off the square is River Street which runs into Amwell Street commemorating the source of the water supply in Hertfordshire. Almost opposite the old Water Board’s headquarters stands Hugh Myddelton Junior and Infant School in Myddelton Street and Myddleton’s statute is to be found on Islington Green facing towards the end of his venture.

There is a fountain playing at the corner of Rosebery Avenue and Arlington Way where Sadler’s Wells still stands which and marks the New River’s final destination.

2 thoughts on “A New River for London”