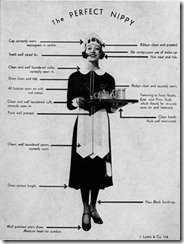 When I were a nipper at about this time of year we would go up West to see the annual pantomime at the London Palladium. In the early 1950s, the Palladium would always have its annual feast of comedy characters in drag: Frankie Howard; Richard Hearne (Mr Pastry); Max Bygraves; and my all time favourite Norman Wisdom.

But the highlight of the trip was not an early introduction into the world of theatre, but the gastronomical delight that preceded the show – a trip to a Lyons Tea Room or Lyons Corner Houses. In the days when Lyons had aspirations beyond a Mr Kipling Bakewell tart these vast emporiums dominated the casual dining market in London.

[T]he first Lyons teashop opened in Piccadilly in 1894, the premises are still a cafe and now called Ponti’s where you can still see the original stucco ceiling of the original teashop. The Lyons teashops became so popular that in the 1950s there were seven along Oxford Street alone and 250 nationally, but it was their Corner Houses which were the most impressive. In total London had three: one on the junction with Tottenham Court Road and Hanway Street; a second at Coventry Street and Rupert Street; the third at the intersection of Strand and Craven Street.

They were huge, the entire ground floor was taken up as a food hall where Mum would buy such luxury goods as coleslaw or Parmesan cheese. Above were three or four levels of restaurants each with their own decorative style with an orchestra playing throughout the day.

But the best was the waitresses in their maid like black dresses, with white aprons and tiara type hats. Originally called “Gladys” by 1926 it was felt that name was old fashioned and suggestions included “Sybil-at-your-service”, Miss Nimble”, Miss Natty”, “Busy Betty” and “Dextrous Doris”, but they eventually were referred to as Nippies because of their ability to move speedily around the diners tables and often no doubt trying to avoid the advances of middle-aged men, although it was reported by Picture Post that every year 800-900 Nippies got married to customers “met on duty” and the publication wrote that being a Nippy was good training for becoming a housewife.

The Corner Houses also had hairdressers, telephone booths, theatre booking agencies and a food delivery service. These were also pioneers of self-service dining, and an amusing anecdote by John Hall tells of the Lyons Corner House in the Strand which offered a fixed price meal, with the attraction of being able to fit as much as you could on your tray for the one price. Unfortunately, the tray was on a conveyor belt moving down the counter quicker than you could stack it with food.

Two other Corner Houses were managed under the Maison Lyons brand one at Marble Arch and the other in Shaftsbury Avenue called The Trocadero, which during the war was given over to American troops and known as Rainbow Corner, it can’t have been a coincidence
that the Windmill with its proud boast “We Never Close” which offered male entertainment was opposite.

In a world just recovering from a devastating war with much a London laid to rubble by the bombing and sweet rationing still in force, high tea was a luxury but sadly the last teashop closed in 1981. Now the good news is that Lyons style tea houses are set to return. Headed by a former operations chief at Starbucks, but don’t let that put you off, using the Lyons teashop brand the first opened in Bluewater shopping centre.

4 thoughts on “When I were a nipper”