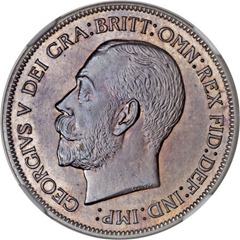 [G]ENERATIONS OF SCHOOLBOYS have searched through their change in the vain hope of finding one and in August 2010 on the internet auction site eBay a 1933 penny bearing the head of King George V surfaced. Experts have always worked on the assumption that only seven such coins were minted and, if genuine, this one would have been worth at least £80,000. Two versions to the coin were struck and it is thought that four had a slightly different image of the King in preparation to an updating of his likeness on all coins. These are particularly valuable.

The Royal Mint had no plans to make any pennies in 1933 because there were already plenty around, however, a small number were produced following requests for a commemorative coin and experts have always worked on the basis there were seven. Of these, three were placed by the King under the foundation stones of buildings, two were presented to the British Museum and two found their way to private collectors. In September 1970, during building work, one of the coins was stolen from the cornerstone of the Church of St Cross in Middleton, Leeds and rather than risk a further theft, the Bishop of Ripon ordered that another coin buried at St Mary’s Church in Hawksworth should be unearthed and sold.

Today the Mint Museum, British Museum, and the University of London each hold one of the coins, with three in private collections. It is worth recalling an urban myth that has again resurfaced following the eBay auction of the rare penny.

The clock keepers of Big Ben have used pre-decimal pennies stacked on the pendulum of the clock to act as weights to help regulate it since 1859 when the clock tower was completed and the first strikes of its 13.7-ton bell, nicknamed ‘Big Ben’, were heard. Adding or taking away coins effects the pendulum’s centre of mass and the rate at which it swings, adding just one penny causes the clock to gain two-fifths of a second in 24 hours.

There is a long and historic relationship between Big Ben and the UK’s coins and few people realise the technical role that old pennies have played inside the clock. There is a possibility, although slim, that one of the 1933 coins has been used in this way. Now the clock keepers of the Palace of Westminster intend to keep hold of the old pennies in case they need to be returned to the pendulum at a future date.

When Did Big Ben First Bong?: 101 Questions Answered About the Greatest City on Earth By David Long Do you know when Big Ben first bonged – or even who Ben was? Why the River Thames is so-called? Which top Nazi was locked up in the Tower? Or what runs through the more than 50 miles of train-size tunnels which ring the city, stretch further than the Channel Tunnel and lie deeper than the Tube – and, no, the answer’s not trains.