The often related story of Phyllis Pearsall getting up at 5.00 a.m. and walking the 3,000 miles in a couple of years along 23,000 streets of London drawing up a map of the capital after she couldn’t find her way to a party in Belgravia is the stuff of urban legend.

The story is almost certain in the main untrue, the first street-indexed map of London was drawn up in 1623 by John Norden and Phyllis Pearsall probably just filled in the blanks.

[T]hat hasn’t stopped collectors wanting to get their hands on a first edition A-Z published just before the advent of World War II. Seeing these first editions passing hands for thousands the Geographers’ A-Z Map Company has reproduced its original 1936 edition for those with less deep pockets. 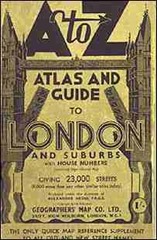 It makes for fascinating reading. What has happened to the Little Theatre on the Strand; the Gaiety Theatre which stood where the curiously named ME London hotel now stands; and who knew the Shaftesbury Theatre was once the Princess?

Most of the clubs still exist but had I been around then I’d like to have belonged to the Eccentric club located in Pickering Place, just down the road from Boodle’s Club.

A quick look at the ‘Underground Railways of London and Suburbs’ map reveals that the Northern Line ended at Archway, even with that truncated line it still probably had the worst service on the network.

On the street maps the detail is so poorly defined it’s surprising that anyone could find their way around the capital’s back streets, and to make matters worse, on the inside back cover is a pull-out three-dimensional map attempting to show a representation of the building as they appeared from the air, printed so small they remain as splodges.

So I decided to put Mrs P’s endeavours to the test. Using one of he most infamous of London’s addresses namely 10 Rillington Place.

We know from numerous contemporary accounts this part of Ladbroke Grove was old, in fact, the buildings were in a state of dereliction by the 1950s. and it was situated west of St. Mark’s Road, just north of Wesley Square.

On the 1936 edition – nothing, nor are many of the surrounding roads at that time are to be found.

A more poignant page is 51 19L to be exact [illustrated below], here is the ancient district of Cripplegate obliterated by German bombing less than four years after this first edition was published. Barbican (a street); Red Cross Street; Playhouse Yard; Jewin Street and Crescent; Paul’s Alley, and more are illustrated, many of which are illegible in this reprint as the streets were so closely packed together.

Cripplegate before the Blitz

Presumably, the late opening is to cope with the extra demand at the beginning of the week.