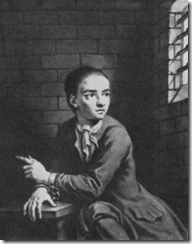 The term “lovable rogue” has been applied to many crooks over the years, most are just unpopular villains, but one from the 18th century remains known to us even today, in fact so great was his popularity over one-quarter of London’s population came to his execution.

John Shepherd known to all as Jack was a fairly diminutive chap at 5’4” and was by all accounts very strong for his size. Born in 1702 in Spitalfields he was Christened with some haste due to his frail condition at St. Dunstan’s. At six years old he was apprenticed to a cane chair maker, that didn’t last, but later following in the footsteps of his father he took up an apprenticeship as a carpenter; he was probably only accepted as his mother’s current lover had taught him to read and write. Leaving his employer after five years he took up with a bad lot at a pub in Drury Lane called the Black Lion and would frequent an area, now developed as the London School of Economics, called Clare Market frequented at that time by prostitutes and later would become the centre for pornography.

[H]e made friends with a criminal called Joseph “Blueskin” Blake and Jonathan Wilde known as the Thieftaker General. Wilde led a double life and was high up in what purported to be the police force at that time, he also led a group of thieves who would steal property and then he would return the stolen goods to the rightful owners for a fee. He also met a prostitute Elizabeth Lyon known to all as Edgeworth Bess who was, not to be ungallant, a woman with a fuller figure.

In 1723 Jack – who by that time had given up his apprenticeship and was partial to a drink – stole two silver spoons from the Rummel Tavern at Charing Cross. He was caught and put into St. Giles Roundhouse a prison that was situated near modern day Seven Dials.

So far nothing unusual, hundreds of small time crooks in London must have taken the same road to the hangman’s noose at that time.

Jack was somewhat different and would have put Houdini to shame. He overcame his first incarceration by breaking through the cell’s timber ceiling and fashioned a rope from sheets with which he shimmed down while still wearing his leg irons.

He was rearrested two years later for picking pockets in Leicester Fields (known today as Leicester Square). This time he was sent to New Prison in Clerkenwell. When later Edgeworth Bess came to visit him he broke out of prison ending up on the roof, from there jumping down into an adjacent building only to find himself in Bridewell Prison next door, this time he climbed a 22ft wall while still manacled and helped Buxom Bess along the way.

Later after being plied with a copious amount of alcohol Bess disclosed to the authorities Jack’s whereabouts, he was duly arrested and this time sentenced to death and put into Newgate. This time he loosened the bars of his window and escaped dressed as a woman. He then went into exile on Finchley Common, but Jack really was Jack The Lad and liked having money, drink and a woman on each arm.

He came back into London and was rearrested, put back into Newgate. This time he found himself in “The Castle” which was a prison within a prison and was thought by the authorities to be impregnable. He was clapped in leg irons and chained to two metal staples attached to the stone floor. He escaped again climbing up a chimney and scaling a 60ft wall making his escape via six barred doors. Back outside with a crowd forming upon hearing of yet another escape and while still in leg irons he diverted their attention by claiming to see somebody on the roof.

Thinking himself untouchable he was at large for two weeks before he broke into Rawlings a pawnbroker in Drury Lane. There he stole a number of items including a fashionable black silk suit which he proceeded to put on and went out on the lash. So conspicuous was he that inevitably he was arrested and put in the “Middle Stone Room” of Newgate and this time loaded with 300lbs of iron weights.

Loved for his escapology people pleaded for commuting his death sentence to deportation but to no avail. Taken by cart from Newgate, a journey that could take two hours, he was plied with drink along the way. At one hostelry, the City of Oxford on modern Oxford Street they gave his a pint of sherry.

When London’s population was estimated at 700,000 an audience of over 200,000 turned up for his execution. He did not die immediately as his diminutive frame was too light to allow the rope to break his neck. After 15 minutes the crowd surged forward wanting a memento of Jack which prevented his friends cutting him down, and trying to resuscitate him.

Buried at the recently rebuilt St. Martin’s in the Fields he was known in his time as Jack The Lad and Gentleman Jack and has had over the years a huge following in popular culture. Painted while in Newgate by Sir James Thornhill the Serjeant Painter to the Crown [see illustration]; the Beggar’s Opera is loosely based on his life; he has been the subject of two silent films; and Christopher Hibbert wrote The Road to Tyburn based on his life. More recently the 1969 film starring Tommy Steele Where’s Jack was also an adaptation based on Jack’s colourful life.

2 thoughts on “Jack The Lad”

When Did Big Ben First Bong?: 101 Questions Answered About the Greatest City on Earth By David Long Do you know when Big Ben first bonged – or even who Ben was? Why the River Thames is so-called? Which top Nazi was locked up in the Tower? Or what runs through the more than 50 miles of train-size tunnels which ring the city, stretch further than the Channel Tunnel and lie deeper than the Tube – and, no, the answer’s not trains.

For the price of an Americano you can ensure CabbieBlog stays on the road, just hit the logo